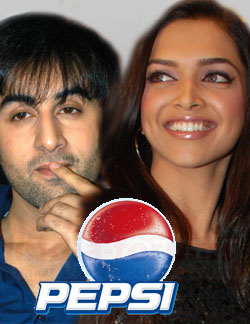 New Delhi, Feb 11 (IANS) Pepsi has roped in Bollywood newcomers Ranbir Kapoor and Deepika Padukone as brand ambassadors. They will be seen with superstar Shah Rukh Khan in its first campaign this year.

'It is a privilege for me to join Pepsi's league of such eminent achievers. I would also like to take this opportunity to congratulate Deepika as Pepsi's new brand ambassador. It has been a great experience working with SRK and Deepika in the new Pepsi Ad,' said Ranbir, who debuted with 'Saawariya' last year, in a press statement.

Deepika, who starred opposite Shah Rukh in 'Om Shanti Om', said: 'It was fun working together with Ranbir and Shah Rukh Khan in the new Pepsi ad.'

This is the first time that Ranbir and Deepika will be seen together on screen.

The creative minds behind the commercial are Agnello Dias and Soumitra Karnik from J Walter Thompson (JWT). Abhinav Deo from Ramesh Deo Productions has directed the commercial.