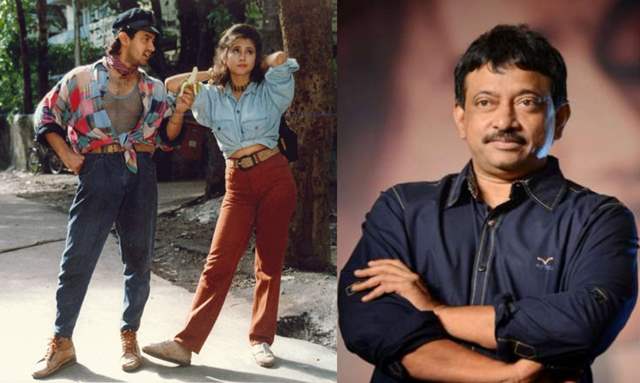 Twenty-five years ago, a major controversy erupted between Ram Gopal Varma and Aamir Khan after the release of the super hit film Rangeela which also starred Jackie Shroff, and Urmila Matondkar.

The film remains fresh in the audience’s memories even after all these years, although despite its success, RGV and Aamir never worked together after that as the director claims that his comments were blown out of proportion.

Now, in a recent interview with Bollywood Hungama, Varma revealed why he and Aamir never worked after Rangeela and addressed the controversy when he said that the actor who played a waiter in the film did better acting than Aamir Khan.

Speaking about the different temperaments that he and Aamir Khan have, RGV admitted that Aamir felt 'betrayed' after certain comments made by him were misquoted in the press, and accepted responsibility for them.

During the interview, he pointed out that because of a series of misunderstandings, he was quoted in a news report as having said that a 'waiter' delivered a better performance than Aamir. Reasoning the escalated bitterness between them, RGV said that because there were no mobile phones at the time, Aamir wasn't able to immediately get in touch with him, and proceeded to make his own counter-statement after believing that he was being 'deliberately' avoided.

They later met and discussed what had happened.

"Aamir is a very dedicated, passionate, and patient person, which I am not. I am a very impulsive guy," the filmmaker told Bollywood Hungama. He said that they didn't have a 'fallout' but more of a 'misunderstanding'. "I don't have any bad blood, neither does he," RGV added.

The Satya director told Bollywood Hungama that he had made a 'technical point' about a certain scene, which he believed was improved by a co-actor's reaction to Aamir's line delivery. He clarified that this point didn't come across to the interviewer, who ran the story with the headline 'the waiter was better than Aamir', and quoted the director.

RGV said he told Aamir, "The whole world has seen Rangeela, they've loved it. That guy is in half a scene. Me saying the waiter is better than you, in what way do you think is going to make any difference? In fact, it will come on me... But he felt betrayed, and that's my fault completely."

Rangeela was a major box-office success which was nominated for several awards. The critically acclaimed film was also praised by the audience and despite 25-years since its release, the film continues to impress the audience.

Let us hope, RGV's recent revelations reach Aamir khan and end the silence between the two. Probably, it's time for the audience to receive another film from RGV and Aamir’s collaboration.

Aamir Khan to play chess against grandmaster Viswanathan Anand to ...