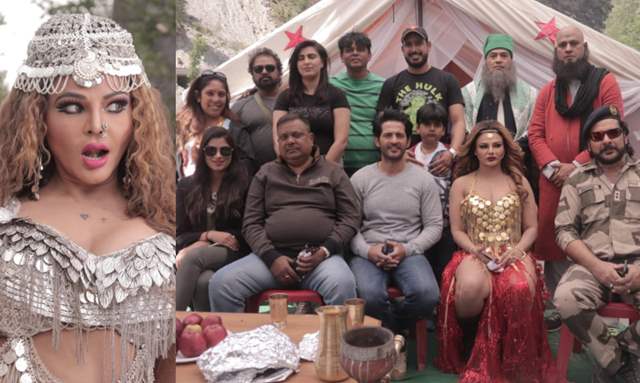 Actress Rakhi Sawant has had her fair and unfair share of controversies. And, her list just got a wee longer. Recently, she uploaded a photo on her Instagram holding the Pakistani national flag clicked on the sets of her upcoming film, Dhara 370. In no time, the actress drew immense flak from the netizens.

Rakhi who is currently on an outdoor shoot for her film took out some time and spoke to us about her project and the trolling she had to go through. Said an irked Rakhi, "Priyanka Chopra got trolled for her MET Gala Look, where she looked, in fact, so beautiful. I am doing a film where I am playing a Pakistani belly dancer. So, Am I supposed to flash the Indian flag or the Pakistani flag? Even if I had clicked with the Indian flag I would have got trolled. Whatever I do they troll me, I don't know what's the problem?"

She added, "I am a proud Indian.I don't have any problem with Pakistan or Pakistanis. I am only against terrorism. I am not a Pakistani spy that people are commenting negative remarks. I am an actor and I am doing my job. In future if I do a Chinese character I will hold their flag too. I respect every flag."

Dhara 370 will feature actor Hiten Tejwani too. The film revolves around jihad and jihadis, and currently the team is busy in finishing the shoot schedule.

MasoomaBukhari 1 years ago [B] her saying she doesnt have problem with Pakistan and Pakistanis sounds way more sensible than some other famous celebrities [:[] [/B]