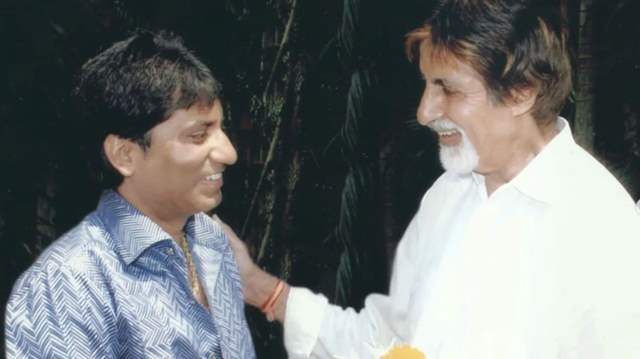 Popular comedian Raju Srivastava passed away last week, on September 21, leaving his admirers and well-wishers with a devastating blow. Even though the comedian's family and friends are still processing this tragedy, Raju Srivastava's daughter Antara has given details about her late father's relationship with actor Amitabh Bachchan and how he thought about him and his work.

Antara, the late comedian-actor Raju Srivastava's daughter, thanked Amitabh Bachchan on Tuesday for supporting their family during these trying times and credited him with helping to make her father popular, according to news reports.

Srivastava, who garnered attention owing to his resemblance to Bachchan, considered the illustrious senior actor to be his childhood idol. Antara took to Raju's official Instagram handle and posted a bunch of throwback pictures of his dad with Amitabh Bachchan.

She penned a note that read,

"Extremely grateful to Shri @amitabhbachchan uncle for being there for us every single day during this tough time. Your prayers gave us an abundance of strength and support, which we will remember forever. You are my father’s idol, inspiration, love and Guru. Since the first time dad saw you on the big screen, you have stayed within him forever. He not just followed you on-screen but off it also. He had saved your number as ‘Guru ji’ in his contacts. आप पापा के अंदर पूरा बसे हुए थे। Him reacting on listening to your audio clip clearly shows what you meant to him. My mother Shikha, brother @aayushmaan.srivastava , my entire family and I @antarasrivastava, are eternally thankful to you. The love and admiration he receives globally is all because of you. Warm regards to you."

On August 10, Raju Srivastava was brought to AIIMS after suffering a heart attack while exercising at a Delhi hotel gym. Last Thursday in Delhi, he was cremated in the presence of his family and close friends.

+ 9
1 months ago miss u Raju Srivastav