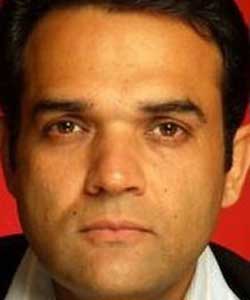 Rajiv will enter as Rano's (Shruti Ulfat) childhood friend who has come down from abroad to meet her.  And his entry in the house will make Alok (Sooraj Thapar) insecure. We hear that in childhood, Rano and Mohit's parents had fixed their marriage but Rano falls in love with Alok and gets married to him.

We contacted Rajiv who told us, "Yes I am entering the show and will be seen for 5-6 episodes. I will enter as Rano's friend Mohit who comes to meet her".

Let's see how Kashyap family reacts to this situation...

raiharshal 9 years ago Well, ita a good serial.
To create situations and food for new episodes, they ge tnew characters.

9 years ago why did he come ...he is as irritating as ilesh and rano.

9 years ago Sorry to say I am really not liking this track and this friend, Mohit, doesn't he know how to behave in front of a friend's family? Total insanity!

Rano has lost it. Her behaviour as a middle aged woman towards a "friend" is disgusting!

Alok was so good, now they're ruining him too. What was need for all the antics? It's very degrading for this character! I'm very disappointed!

+ 2
9 years ago Ok Wat ever u all say I m Loving this new Friend Track...Not cuz of the actor or either Rano...Just loving Alok and the fact that he is getting separate track for himself :)

9 years ago Rano & Ishan's OTTness is making Alok insecure of his marriage . While What the ***** rano is smoking ? Sharmaing in front of her In-Laws for a childhood friend ? Is Rano sure she was not in LOVE with Mohit ? The way she is behaving it looks more than innocent Friendship . As for Ishan He too behaved with OTTness regarding his childhood friend so What can v expect 2 idiots Maa - Beta !!!!

9 years ago Silly, unnecessary and Rano and Ishaan's behavior is ludicrous. She's acting like a school girl who's got a crush on Mohit and she's supposed to be a MA, SAAS and BAHU? Chi chi

+ 2
9 years ago SGP, adalat----crime patrol & I remember seeing him in saas bina sasural too!!! many shows! keep it up

9 years ago i think the track will be funny...
but i wish he falls for radha bua;)

+ 4
9 years ago Fall for Radha bua is a good suggestion.

+ 3
9 years ago He is a good actor, Hope he falls for Radha bua and Marries her and stays back.