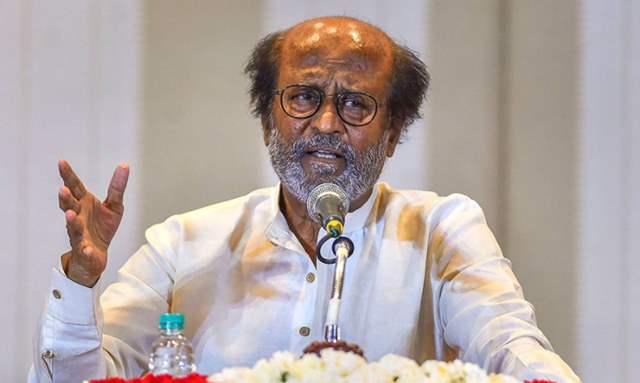 A lot has been talked about actor Rajinikanth’s decision to step back from venturing into politics even after the excitement among his fans crossed borders. In a shocking turn of event, thousands of fans and well-wishers of the superstar gathered in Chennai on Sunday demanding his entry into politics.

Now, the Sivaji actor has released a statement asking his fans to no force him to enter politics and said that his decision will not change. Taking to his Twitter handle, Rajinikanth penned a note in Tamil which loosely translates, "My heartfelt thanks to those who did not participate in the protest, in line with the leadership request. I have already elaborated on the reasons as to why I am not entering politics now. I have announced my decision. I humbly request you all to not conduct such events and force me to enter politics and cause me pain."

To recall, Rajinikanth was recently admitted in the Apollo Hospital in Hyderabad for high blood pressure. He underwent treatment for three days before he was discharged on Sunday.

Previously, the 70-year-old actor released a statement post his recovery and said that he views this recent health scare as a warning from God. "I see this as a warning given to me by the Lord. If I campaigned only through the media and social media after I started the party, I would not be able to create the political upheaval among people and win big in the elections. No one with political experience will deny this reality," Rajinikanth said.

He also apologised to his followers as he continued, "This decision of mine will disappoint my fans and people but please forgive me. I will serve the people without entering electoral politics.”

Rajinikanth was all set to announce a date for the launch of his political party on December 31, 2020, and contest the Tamil Nadu election.

PM Narendra Modi wishes Rajinikanth on his birthday with a heartfelt ...