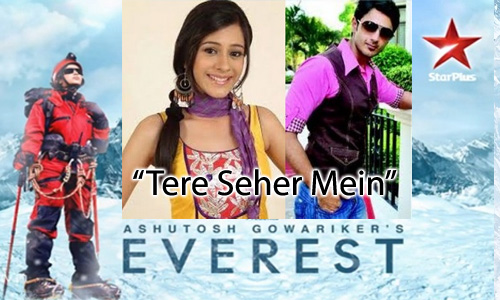 Rajan Shahi's much touted Tere Sheher Mein which is slated to hit the tube in the month of March, might replace Ashutosh Gowarikar's highly impressive show EVEREST.

EVEREST which has struck the right chord with the viewers, will go off air as it's a finite show. Tere Shehar Mein which stars Heeba Nawab and Dhruv Bhandari in the lead roles, will take over its time slot of 10 PM.
Our source says, "There is a probability that Tere Shehar Mein will replace EVEREST. It's a love story and a few of the scenes are being shot in Benaras."
When contacted Rajan Shahi he chose not to comment regarding the development of the show.
Phalguni Sharma

jetvis37 6 years ago Everest is the best show ever...i have recorded all the episodes on my DVR...star plus viewers just do not deserve this kinda shows cuz they like stupid shows like sathiya n all...lol

+ 6
6 years ago Everest is one of the brilliant show in Indian TV recent times.. It can't even be compared with any of the show as it's had own charm and incredible concept which we couldn't believe on!! Because of everest SP viewership got increased can you agree with that.. It's one of the most stupendous show given by makers.. SP must be proud to have such a meaningful show in their list..!! Everest rocks not because of its huge project but the concept worth it more than anything.. Rohan, Shamata and Sahil doing amazing job!! Every character looks realistic, simple yet gentle!! That's the beauty of this show!! AG mindblowing work by you!!

+ 4
6 years ago Everest is one amazing show. I know it's finite show but I hope it will at least continue till April or may

6 years ago EVEREST is a fantastic show. All Artist doing super job...

6 years ago Everest awesome show...i love so much all artist superb..

+ 3
6 years ago Everest is an awesome show loving it but i know it's a finite show & they can't keep it for so long since it will cast them a lot & when u stretch a show it gets ruin so it's gud not not stretch it...

6 years ago EVEREST is a fantastic show. Just like a movie! Most memorable show in recent times!!