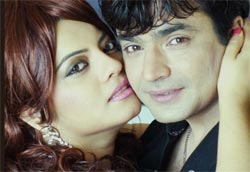 Raja Chaudhary dreamt of getting settled yet again with his new-found love Shraddha Sharma, and had even thought of marriage plans!! But things did not fall in place, as he failed the loyalty test that Shraddha imposed on him thro' the show Emotional Atyachaar on UTV Bindass.

We are all aware that Sharddha had given comments to media then, that all was over between her and Raja. But we hear that Raja is trying his level best to woo his girl yet again, and gain her confidence back!!

Ask Raja about this, and he says, "We are committed to each other even now. We may get married next year".

With this, we called Shraddha to get her point of view on the same, and even asked her whether all that happened in the show was real or just a TRP game. Shraddha tells us, "No, everything was real. Raja made a lot of confessions to me, and has promised that he will not commit the mistake of flirting again".

When we asked her about the kind of relationship they share now, she said, "I have accepted his apology, and we are in talking terms, but just as friends".

Ask her about marriage plans with Raja, and pat comes the answer, "No I am not planning anything like that".

However, our dear own Raja is leaving no stone unturned in pacifying her. He goes on to say, "Yes, it is true that she was hurt. I have had to do a lot of things to keep her calm. I have gifted her diamond ring; we were out on a tour to USA recently. I have asked for a year's time within which I will prove to her that I don't flirt anymore".

Well, we really wonder whether it is so easy to win a woman's heart after a bout of betrayal!!

10 years ago one of the worse guys ever heard of.He could be hero series named cheepoo no1

+ 2
10 years ago How can she accept his apology after she has heard this from others and seen it with her own eyes...If she is sane best for her is to run away from him...otherwise ek saal ke baad phir shuru..

specially that stupid RAJA,he is a master piece
so disgusting n irritating he sometimes gives compition to rakhi sawant

kinny_sid_fan 10 years ago he is so cheap n disgusting...
if at all she accepts him r even give another chance for him then she is the cheapest gal n biggest fool..yuck

10 years ago sheesh he doesnt deserve a second chance.

10 years ago how disgusting is this!This kind of cheap & 100% fake people are getting limelight in a prestigious site like this.Who cares about this two wanna B's??SUCH A WASTE OF TIME

+ 2
10 years ago He will never change!!!!Why don't girls learn from what happened to Shweta??

+ 4
10 years ago I cant believe she will give him another chance!!