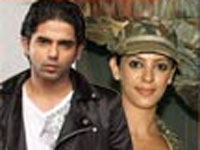 Yesterday Tellybuzz had given out the names of the celebrity Jodis to participate in the upcoming NDTV Imagine reality show, 'The Baby Borrowers', produced by BBC. According to our report, Gaurav-Mouni, Apurva-Shilpa, Sachin-Juhi, Gurmeet-Debinna and Raj Singh Arora-Swati Taldar had been finalized.

However, now it has come to our knowledge that Raj Singh Arora( Remix) and his girl friend Swati Taldar(Left Right Left, Second season)  have been dropped at the last minute to accommodate Rakhi Sawant and her fianc  Elesh Parujanwala.

A source who did not want to be named said, "The channel has decided to cash in on the fame of Rakhi after her recent swaymavar on the same channel. And in this situation, Raj and Swati become the unfortunate ones to be left out. The item girl was not in the original list of participants approached", adds our khabru.

We have further learnt that Raj and Swati had even signed the contract with the channel, but they could be replaced as most contracts have built in safety valves as far as the
latter are concerned.

gr8_mms 11 years ago oh its really bad i dont want rakhi in the show she will ruin the show with her dramas..

diyafah 11 years ago I only wanted to watch this show for the Ramayan Jodi. Gurmeet and Debina :)

But I guess Rakhi will never be enough of her fame. RKS was ok. Nothing too good =\ Instead they should have got some other jodi. Rakhi's got enough fame from her show anyways.

They should get someone like Karan Singh Grover and his wife :D

AVFAN 11 years ago Wow rakhi will be here too!!! cool now got a reason for not watching the show

-Kash- 11 years ago That's so not fair, Indian TV is going down the drains, there is no dedication, no determination, everybody's just trying to make profits, its not about entertainment or sincerity anymore!!
So pathetic

AshiYuvi4life 11 years ago Well said Nattu! I agree babe! Our ra is WAY too good for this show.

hey.bhaggu 11 years ago Well i'm glad tht raj-swati are not doing this show after knowing what channel actually wants in the show...the controversy queen, Rakhi Sawant!

Thanks TB...Rock on raj and swati! You both simply rock!

Madiha. 11 years ago is this copy of the american Show "the baby borrowers" (the show where teen couples had to experience life with kids of all ages ) if it is then they shud do summat of their own instead of copying

"Would Have Dragged Anurag To Court Had He Said Such ...
a minute ago