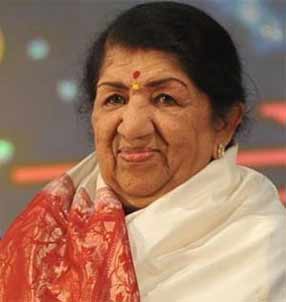 Veteran playback singer Lata Mageshkar, whose links with the Kapoor family go a long way back, says legendary actor-filmmaker Raj Kapoor had an in-depth knowledge of music and music in his movies had his contribution to a very large extent.

On the occasion of her father Dinanath Mangeshkar's death anniversary April 24, Lata honoured "Bobby" star Rishi Kapoor for his excellence in acting.

Asked about it, Lata said: "Yes, I've always thought very highly of Rishiji's acting talents. The whole family, Rishiji, Neetuji, their son Ranbir and daughter Riddhima came for the function. It was very kind of them."

"As you know my links with the Kapoor family go a long way. Ranbir and I share the same birthday. In fact, Raj Saab's daughter Reema was also born on the same day as me (Sep 28)."

Tell us about your bonding with Raj Kapoor?

"He was a musician himself. The music in his films had his contribution to a very large extent. He would often play the songs and then the composer would take it up," said the 84-year-old who sang hit numbers for Raj Kapoor's films like "Ghar Aya Mera Pardesi" ("Awaara"), "Pyar hua iqrar hua" ("Shree 420"), and "Yeh galiyan yeh chaubara" ("Prem Rog").