Rahul Mahajan’s histrionics continues in Bigg Boss as the man is supposedly evicted from the Lonavla house after he refused to apologize to Bigg Boss last night. 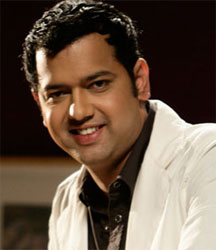 Featured Video
According to our source, “After the production team stopped the four contestants Raja Chaudhury, Zulfi Sayed, Aushutosh and Rahul Mahajan from eloping, Bigg Boss demanded an apology from the four guys. While the other three apologized, Rahul refused to do so, and as a result of this he was evicted from the house”.

“Rahul will not be seen in the Bigg Boss house anymore as he broke the laws”, quips our source. It is heard that Rahul’s sister Poonam Mahajan landed in Lonavla to take her brother back to Mumbai. On the other hand, few eyewitnesses have tracked Rahul in Lonavla even now. “Whether the lad is back in Mumbai or not does not matter to us, he is for sure out of the Lonavla bungalow”, confirms our source.

News is that there was huge money placed on Rahul Mahajan in the market as many traders felt his chances of winning Bigg Boss were high. “Raja and Monica too were top contenders to win; with Monica and Rahul gone, Raja now holds the best chance of winning Bigg Boss”, explains our source.

We tried calling Deepak Dhar, MD, Endemol India, but he was unavailable for comments!!

Well, as the countdown to the Grand Finale in COLORS’ Bigg Boss begins, we bid adieu to the ‘Kanhaiya’ of the house, Rahul Mahajan!!

replyag 13 years ago I am sympathetic with Rahul, it seems he has been deliberately provoked by Zulfi & Raja. Poor Rahul. Zulfi & Raja should be greatful to him.

I have mentioned more details on indianmoviestvmasala.blogspot.com

13 years ago well.........after rahul''s eviction it has become tough to predict who will win, coz if rahul was to stay more then it was sure for him to win ..... but now i guess its either raja or zulfi!!

kewl006 13 years ago Glad that Rahul is out. He was such a looser. I hope BB dont bring him back as a wild card entry again. You never know, this is BB, anything can happen. If he is back, NO MORE BB for me.

risha13 13 years ago oh god...at last he is out..he cudn''t manage a house and he is planing to handle a political party...!!biggest looser in reel life as well as in real life..

13 years ago Good riddance , his ego got the better of him .