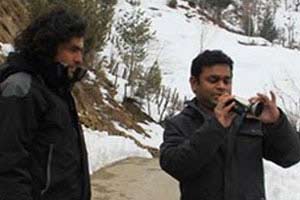 A.R. Rahman, who is behind the soundtrack of Imtiaz Ali's "Highway", has also sung a song titled "Maahi ve" for it. The filmmaker says he is surprised by how the Oscar winning composer manages to get a pulse of a movie's soul so well.

"'Maahi ve' is coming more from Rahman sir than from Irshad or me. This is one of the songs that Rahman sir makes and one wonders how does he get the soul of the the story so beautifully," Ali said in a statement.

Written by Irshad Kamil, the soft romantic number "Maahi ve" is picturised on Veera, played by Alia Bhatt, and Mahabir, essayed by Randeep Hooda - two strangers who come close to each other because of the circumstances.

"'Maahi ve' was not a part of the original brief, but I cannot imagine the film or the album of 'Highway' without it," added Ali.

"Maahi ve" is the second song to be launched from the "Highway" album after "Patakha guddi", which signifies the free spirit of a girl.

"Highway", produced by Window Seat Films and presented by Sajid Nadiadwala, will be released worldwide by UTV Motion Pictures Feb 21.