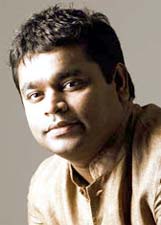 Fans of the Oscar winning musician will be pleased to know that AR Rahman is set to work on his first full-fledged movie for Hollywood!
Titled Couples Retreat and directed by Peter Billingsley, the movie will star actors like Jason Bateman, Vince Vaughn, Malin Akerman, and Kristen Bell.  The romantic comedy revolves around four couples who head for a tropic island resort for a much needed vacation.  While one of the couples is there to work on the marriage, the others fail to realize that participation in the resort's therapy sessions is not optional.
Rahman is looking to explore new avenues and said that he will make music to suit a typical Romantic comedy, but with a distinctive touch of Indianness.  However, he stressed the fact that the music would not showcase any Indian sounds and would be different from his previous work.
Apparently, there were numerous brainstorming sessions in which sound and feel of Slumdog kept cropping up.  However, Rahman who agrees with his friends and admirers, has repeatedly said that Danny Boyle's Slumdog was far from his best work.
After all, completed in 20 days flat, how can the compositions of Slumdog compare with far superior works such as Lagaan, Dil Se, Roja; and not to mention his yet to release projects such as Ravan and Blue?
Accordingly, Rahman wants Hollywood to see some of his best work.  Thus, he is working hard on a fresh new composition.
Featured Video