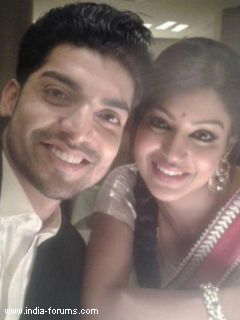 We had reported late last night about how Debina Bonnerjee Choudhary had injured herself during one of the acts which lead to a fractured rib and the couple was in a dilemma about continuing with the dance reality show Nach Baliye season 6 on Star Plus.
The couple who were to consult the doctors today are now ready to announce their decision. Sounding relieved Gurmeet says, "We have spoken to the doctor who has given us a go-ahead to perform for Nach Baliye." However, the green signal comes along with precautionary measures says Gurmeet, "Debina has been advised physio therapy and also taping of the waist and a belt to be worn at all times. She is on pain killers and calcium tablets which will help her gain strength. The physio therapist will be with us all time on the sets during the rehearsals as well as during the main performance as an additional measure. The most important thing is that there are movements that we have to avoid and at the place that Debina is hurt we have to avoid any touch or contact altogether."
Since it is just last couple of weeks left for the show to come to an end, the couple will have to give their best. Will Debina be upto the mark? "Debina is a strong girl who had performed for two weeks despite being in pain and we had earned our full marks then too. Also we have very smart choreographers who know that they will have to think of ways and moves which will not hurt Debina anywhere so we plan to set our dance accordingly. They have been told to give us lifts and all as well but we will be doing them carefully."
Gurmeet is confident that they will make it to the finale and these things will not scare them, "As a husband I am most concerned about Debina's health and we took this decision only after the doctor's advice. As a fighter couple we promise our fans that we will give our best and we will kill it!"
All the best to you guys!
Seema Khot Mattoo

gurlover89 7 years ago Love you so much Gurmeet Choudhary
I will ALWAYS support you... u r such a passionate n mind-blowing dancer.

7 years ago U r a brilliant performer Gurmeet Choudhary. MAY ALLAH ALWS BLESS U.

7 years ago Gurmeet Choudhary luv u, luv ur dance, luv ur acting. U r d best.

+ 2
7 years ago Good evening guru and hope you are doing good.

May Lord shower his blessing upon you and help you achieve all your dreams...

+ 4
7 years ago Gurmeet sweetheart take care of your health..