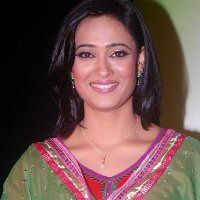 Television's beautiful actress Shweta Tiwari who has won millions of hearts of the audience will be seen in Star Plus' upcoming show Mad In India. As the show marks the presence of ace comedian Sunil Grover, the show is being compared with another rib tickling comedy show Comedy Nights with Kapil.

The audience and the media it seems is assuming that the show Mad In India is made on the similar lines of Comedy Nights with Kapil.

The talented actress Shweta Tiwari who will be seen playing Katrina Mishra in the show Mad In India puts a rest on these assumptions as she was questioned about the show Mad India competing the other show Comedy Nights with Kapil and says,  "No, we are not comparing with Kapil and why will we compare. It's compared by you guys and we have never thought of comparing it. If we had any intention to compare then we would have brought in the characters of Dadi and Bua. But no we are not doing anything like that. We are coming up with a different concept where we have shown a Moholla in which these various characters reside. People today prefer watching comedy shows rather than daily soaps and they watch it laughingly, enjoy and sleep without doing any comparisons. So please guys don't compare."

Shweta was also a part of the show Comedy Nights with Kapil and has won a reality show Comedy Circus - Ka Naya Daur with Kapil and shares a friendly relation with Kapil. So when asked Shweta about Kapil's reaction on her decision, she says, "When I got the offer from Kapil's show, I was already in talks with Mad in India. I told them that I am getting offers for both the shows. But later on I realized that Kapil's show is already set and is doing very well. All the characters are executing their acts well and the show is getting good response. If there is an introduction of a new character then there is no guarantee that it will survive or not. And this show Mad in India was a new show and had interesting character of Katrina Mishra for me. So when I told Kapil and his team about my decision they were absolutely fine with it they said it's your career and you are free to take your decisions. It was really very sweet of them to say this. They indeed a very supportive team."

We hope that the audience likes the show Mad In India and appreciates Shweta's character as well.

dey.bh 6 years ago well! only time will tell who is actually mad in India.

divinity11 6 years ago CNWK is the best show and so is Kapil...He is a natural and so talented.its good if you are not competing with him because you can't ...even in your dreams .

MII is really pathetic n boring. I always says comedy is not SP's cup of tea.

preetie 6 years ago Just watched suneils show...it was extremely painful to watch. This just proves you need X factor to come up with comedy show. Just because you can round up bunch of people from comedy circus is not going to cut it.

I will give mad in india another chance to made drastic improvement. Else it's a lost cause...sorry that is the truth and yes it's going to hurt... Sunil you are miles far lower than kapil on your own.

noor321 6 years ago Unfair that people are not giving another show chance. There are hundreds of shows on south indians should they start complaining. A hundred comedy shows, should they complain? People could say Kapil's show is a copy of comedy circus because he came from there and has people from that show and also performs on a stage.