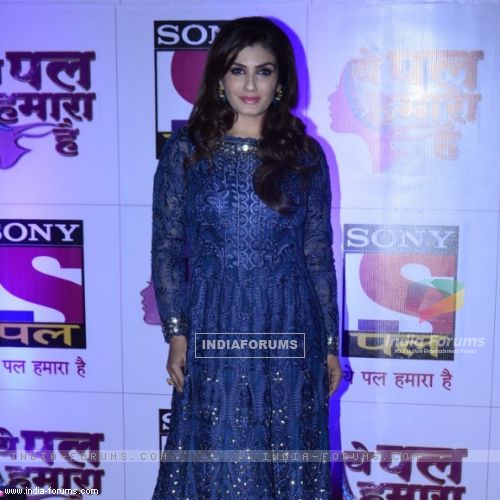 The beautiful actress Raveena Tandon, who has been applauded for her acting skills in many movies, is all set to inspire women through her chat show Simply Baatein with Raveena. Raveena like other actors is all set to set a benchmark for the people through this show which airs on Sony Pal.

Let's see what Raveena has shared...

Telling us more about the show Simply Baatein... Raveena says, "This show is special. My show Simply Baatein with Raveena on channel Sony Pal is a woman centric show.  The common man and the viewers who bring the maximum TRPs includes housewives also who watch TV. The show's main motto is to reinforce such women.  Women who look after the household work throughout the day and later just to relax a bit they watch their favorite shows and this show is aimed towards women. I think that is very special to me because ultimately me being a woman I do understand what women have to face. So I think many such shows can be made which deals with issues relating to woman."

As this is a chat show, so whom will Raveena invite on her show and what will be the first question she would ask to the guest on her show? This is what she says, "It is not a star based show, it is a show projecting the life stories of common woman dealing their issues and problems, so our main stars are the audience and we invite them on the show to discuss their problems. To solve their problems we have our expert panelists who will advise and aid them in dealing with their problems. I think this show is very important for such women."

Talking about the 'PAL' moment Raveena says, "There are many moments in every woman's life. To elaborate it more it can be anything like your child's first birthday, checking his/her report card, your achievement in anything that has fetched you a reward, the wishes of your parents and their love etc. Everything is special so women are basically emotional and for them there is no such special moment in fact they cherish all the moments happening through their life."

When asked the beautiful actress if she has ever done any bold or manly thing or not, Raveena says, "It is not written anywhere that women can't take up a bold profession or enter into any field dominated by men. Today even women are established as they have become more assertive and firm. We have seen women driving trucks, auto rickshaws and they have made it in to the aeronautics as well. Late astronaut Kalpana Chawla has set an example for a few women along with Sunita Menon. Today top doctors, mathematicians etc. most of them are women. So there is no specific field set for women and especially in our country, revered boxer and a champion Mary Kom and few other who have bagged a gold medal have clinched a mark higher in their work. Our Indian women have propagated their name in various fields. Whenever I step out and see a traffic constable being a woman, I immediately click a picture and tag them as 'The Hero' and I tweet it because for me it is a proud moment."

It would be interesting to watch the show Simply Baatein with Raveena!