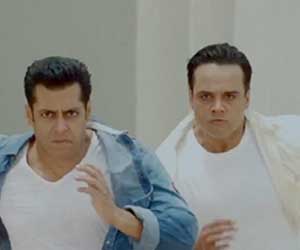 Even as he is busy with Balaji's show Pavitra Bandhan on DD, Yash Tonk is getting ready for the release of his latest film Jai Ho which stars Salman Khan, Tabu Hashmi, Suniel Shetty and Daisy Shah in the main roles. "I play the character of Babu in the film. It is about childhood friends and family. I would say it is a nice supporting role and I am looking forward to the release."

This is not the first time that Yash has shared screen space with superstar Salman Khan; they both have done a film earlier Main Aur Mrs. Khanna but yet it was Salman's presence which influenced Yash into saying yes to the movie. "When I was offered this role, the first reason that I wanted to be a part of the film was because I was again getting a chance to work with Salman Khan. And secondly, Sohail Khan who is co-producing and directing the film is a very good friend of mine so there was no chance of me refusing it."

Even though Yash and Sohail have been friends for long, Yash maintains that when they are working they don't mix personal and professional things, "We both are mature individuals and when you know your friend is a director then you feel more responsible for every shot you give and everything around. In fact we all were quite close and friends with each other and there was a family kind of bonding with everybody on the sets."

Yash who has maintained a great body, also got a chance to spend time with Salman and discuss their favorite topic which was body building whenever they got any free time on the sets, "Salman is a big guru of body building so obviously he gave me tips and we had conversations about health and fitness. The whole experience of working with him has been fantastic. He has been a star for so long and even when I was young I remember idolizing him while watching whatever he would be doing. He is like a big brother for me."

Yash who has always done only lead roles in Television is not bothered that he has not got offers to play a hero in any film and says that he is satisfied with his career in films, "Over the years in this industry I have learned that one needs to be very practical and it is better to be safe than to aim high. When you do a solo film there is more responsibility and if anything goes wrong then all efforts go for a toss. My ambition is to do good roles whether it is in films or TV."

Yash also praises his wife Gauri Tonk who is currently seen in Ek Boond Ishq which was sort of a comeback for her, "Gauri is looking very nice in the show. I don't get time to follow it but she is a competent actor. Whatever she does will be good."

So what's next? "In a month, almost 15-20 days I am busy with shooting for my show Pavitra Bandhan. There are couple of projects in the pipeline. Apart from that I am also part of Sohail Khan's Celebrity Cricket League team and we will start our practice sessions soon from next week," concludes Yash.

Well, we are sure his fans hope to see him more often whether it is in films or television!

Love ur dressing and acting in EBI

Simran114 6 years ago Its great to see Gauri back on tv after so long. She's doing a great job.

Good luck for your movie Yash!

-Yuks- 6 years ago Gauri looks great in the show but I wish she had more updated outfits.

Sia889 6 years ago Gauri Tonk is a fine actor.
Hope she gets good scripts and get to do nice shows.