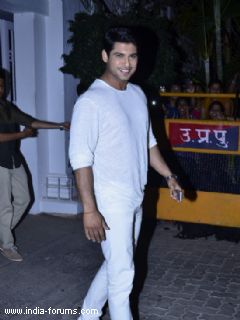 Sundays are special! So we thought of bringing something interesting to our viewers this time. We thought of asking your favorite actor regarding their love for movies.Â

So this time round, we have handsome hunk Siddhart ShuklaÂ who is seen as Shiv in Colors' popular show Balika Vadhu to share with us his love for films and what attracts him the most while watching films.

Speaking about his craze for films Siddharth says excitedly, "I like to watch movies very often in fact I am a big movie freak and I watch it whenever I get free time. Now a days I am not able to watch much movies but before I used to watch it very frequently."

When asked about favorite movie Siddharth says, "My favorite movies are many. I can't name one, to start with Fast and Furious from Hollywood and talking about Bollywood it goes from Agneepath, Deewar, Vaastav, Dilwale Dulhaniya Le Jayege, Jab We Met and many more. I like the entire package of these movies. They are just great and I can't stop watching them when it comes in front of me. I watch these movies a number of times and still like to watch it more."

When asked the difference between the small screen and big screen Siddharth avers, "Small screen is a fast food whereas Big screen is a royal cooking. TV shows are aired everydayÂ  whereas Movies have their own pace and time. By pace I mean for TV shows we don't get much time and creativity to think for as it has to be executed daily with having less time in hand so the directors, actors none of us get much time to think for our work and we have to just execute it. Whereas for movies we get lot of time to think about our role, character, story or even from technical side, we get plenty of time and so TV shows run in fast pace which is the main difference from the movies."

Truly these are some really amazing dialogues we have heard.

Further he continued, "I like the scenes pictured with these great dialogues which are easily memorized and on hearing names of such movie, the above scenes strike my mind."

Lastly we asked him about his favorite actor and Siddharth says, " Amitabh Bachchan, Sridevi Kapoor and Madhuri Dixit Nene.

Let's hope if Siddhart can get an opportunity to work with his favorite actors.

6 years ago Siddharth Shukla, you have exactly the qualities of a movie star...

6 years ago Siddharth Shukla, you are a well-read and intelligent guy, love you!

6 years ago Love you, Siddharth Shukla.. Wish you all the best for your movie

6 years ago Love you Siddharth Shukla, All the very best for your movie..,.