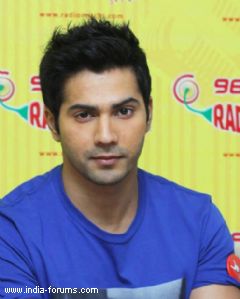 One-film old actor Varun Dhawan, who will be seen as a vegetable vendor in his debut TV show 'Mission Sapne', says the show will be 'brilliant'.

"It is going to be a brilliant show. It will be aired on Colors Channel. It is titled 'Mission Sapne'. Please watch that show. It's a really good concept," Varun told reporters here on Thursday at the launch of the trailer of his forthcoming film 'Main Tera Hero'.

"I had shot for the episode earlier only. I became a patiwala and sold vegetables as a vegetable vendor in the Crawford market (here) and shot for five to six hours there," he added.

Other celebrities, who will make an appearance in 'Mission Sapne', include superstar Salman Khan, cricketer Harbhajan Singh and singer Mika Singh, among others.