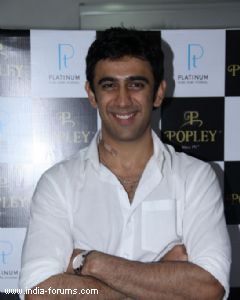 Actor Amit Sadh, who was in a relationship with actress Neeru Bajwa for a long time, says he is currently single and happy.

Around three years back, he was happily in love with Neeru. The couple was first seen together in TV show 'Guns & Roses' and later on dance reality show 'Nach Baliye 1' in 2005. The two also got engaged, but broke up in 2010.

Amit says he is still single since then.

"And I like it that way. Of course, there are rumors the minute I am seen with a girl. While I was shooting in Punjab with Taapsee Pannu, I went out for dinner with her. The next day we were a couple in the papers. But the truth is, I am not seeing anyone," said the actor, whose work in the 2013 film 'Kai Po Che!' was lauded.

He was told about his split from Neeru during his stay in reality show 'Bigg Boss 1' in 2006. He admits he was a "cry baby" on the show.

"I was only 22 and. therefore, just a baby. Inside 'Bigg Boss 1', emotions are constantly heightened. It's not a normal place to be in."

"On top of that, I was told my girlfriend Neeru Bajwa had left me. Can you imagine, she was my life! And to be told inside there where I had no way of ascertaining the truth, that she had left me...it shattered me," said Amit.

But he found a new lease of life, ultimately.

"I used the money I got for 'Bigg Boss' to go to the Lee Strasberg Acting School in New York where I learnt to be single again," he added.

LimitLessFan 6 years ago Hmm... i dont rem BB or anything , but i do rem this couple, if he is happy good for him

ukgal62 6 years ago Neeru did a role in the very popular tv serial called... ASTITVA... Few years ago as the other women. Talented young lady

mandy001 6 years ago neeru z best actresa in pubjabi movies bt i came to knw her only in punjabi movies...is she hindi television actress???

ukgal62 6 years ago Bless u Amit! Yeh neeru has moved on big time to punjabi movies. It's sad how newcomers use others to make their way into the industry... Good luck Amit!

KurbaanHua 6 years ago YES YES YES i remember Amit very well from Bigg Boss. I loved seeing his love for Neeru. And, his crying only soften me towards him.
If i'm not wrong Neeru is also doing Punjabi movies.