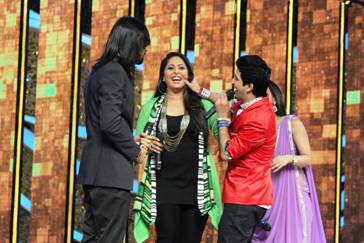 Visiting the sets of Dance India Dance Season 4 this weekend is the most-loved and looked-up-to choreographer - Master Geeta Kapur, affectionately called Geeta Maa'. Promoting her upcoming show Dance India Dance L'il Masters Season 3, Geeta Maa was glad to be back to the sets of the show she first shot to fame with. Just like her, the crew was glad to have her back too, but one person whose excitement seemed to rocket with her arrival on the sets was Master Ferozz Khan.

Being associated with Geeta Maa for over 15 years, Ferozz Khan and Geeta have a lot in common. From assisting ace choreographer Farah Khan together to becoming the judges of India's biggest dance reality show - Dance India Dance, the two of them have come a long way. The camaraderie between the two was apparent throughout the shoot for the episode. Feroz went straight for Mudassar's jugular when he tried to pull Geeta's cheeks. Cautioning Mudassar Khan about Feroz, Geeta in a lighter vein said, "Feroz is the only reason why I am still unmarried. He is so possessive about me that it keeps me away from men. He hates other men coming anywhere close to me, which is one of the reasons why I am single. But, it also makes me feel secure and safe every time I am around him."

While Feroz wouldn't let Master Mudassar come near Geeta Maa, he only allowed Master Shruti Merchant to come near and hug Geeta Maa. Even during the shoot, Master Feroz ensured that Geeta Maa's chair was placed right next to his chair and the two were caught engrossed in discussions whenever the Director announced a break.

Master Feroz, quite like a protective best friend around Geeta, said, "Geeta Ma is one of the most special people I've come across in life. She has so much love for people around. Her sense of humor has everyone in splits. She's such a huggable teddy bear. There's so much to learn from her, not just as a dancer or choreographer, but as  person."

Meeting her after ages, Master Feroz surely seemed to have enjoyed each moment of catching up with Geeta Maa on the set. With the kind of bonding the two seem to have, we are sure the two will spill more beans about each other during the course of the episode.

Tomiko 9 years ago It's true that professional actors should aim to put aside their differences to work on their projects as has been the case with lots of "Frenemies" in Bollywood.

However at the end of the day it's his choice and with something like a break-up (plus the catty comments), can you really blame him for saying no?

cooks09 9 years ago ranbir is doing right thing.. anyways he won't look good with tat stonned face actor who does not act and ranbir is such a good actor .after those bad remarks in public who in the right mind will work with her

masin 9 years ago are you for real?!? ranbir isn't being unprofessional, but rather smart with his decision! if deepika can bi**h about him on national television, then the least ranbir can do for himself is to deny working in a movie where he'll have to put up with her, her unecessary comments and her good for nothing attitude! way to go ranbir..show this chick her route back home!

Chocolate... 9 years ago unprofessional?!!!
r u fricking effing me!!! unprofessional my foot like srsly he only refused to work with her not leave nasty comments. like m angry abt this one, u think this is unprofessional while deeps can go around saying every BSed up crap in her mouth while no one has sympathy for the lad. eff her like she is the one to blame for this!!!

SunriseGreen 9 years ago Unprofessional? I think NOT. I feel his decision is completely fine. If anyone was unprofessional, then it was Deepika during Koffee With Karan. She totally lost my respect that day. Ranbir is totally justified if he wants to stay away from her.

Rhimjhimsawan 9 years ago He is not bound to do every movie a director offers him, if he feels uncomfortable around Deeps (which is completely normal) then it's totally his decision.

Neha_K 9 years ago it's better if they part their ways!
if salman n aish don't even luk at each other, then they are at highest level of UNPROFESSIONALISM... acc. to u buddies, right??