View Profile
Sony TV has always given us fresh faces, and the latest entry, all set to make the mark  in the industry is none other than the 'mastikor' and the clean hearted Dhruv of Chhajje Chhajje Ka Pyar, Manish Tulsiyani.

Manish, in an exclusive chat with Telly Buzz, tells how his dad had given only a year to set himself in the industry and how he is happy with his son today. 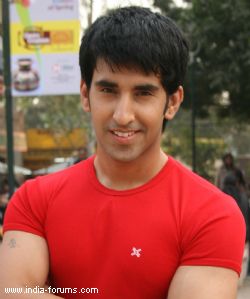 How has been the experience in the show so far?
I had a great experience so far and since it is my first show, it is really close to my heart. We have a great DOP, Deepak, who is always there to help us any time. I always get positive vibes from everyone around here, where all are like a family already. Though initially I was really apprehensive about doing scenes with senior actors, I later realised that I actually feel really comfortable doing scenes with them

How did you bag the role?
I started my career as a model doing print ads when I came to Mumbai for the first time. At that point of time I did not give a serious thought about television shows and acting. But later on, my Manager, Rupesh Sonar informed me about the auditions that were going on. When I appeared for the auditions, I was offered the role of both Daksh and Dhruv and had auditioned for both. But I guess I could connect more with Dhruv and could perform that well. But even when they had called for the look test and a scene, I had not built up hopes because I had already been rejected from certain shows. But I feel that the show was destined for me.

How can you relate yourself with the character?
Dhruv, in most ways is similar to Manish, apart from the fact that Manish is really a fun guy and mastikor only with close friends and family whereas Dhruv with everyone around. I am little shy when it comes to mingling with strangers and take time to get along with strangers.

The ratings of the show have not been really impressive; comments?
Actually the show began with the season of World Cup and that was the reason the show suffered with the TRPs. I hope we pick up on that as well because the show is really very nice and we are really working hard for it.

How is your rapport with Shambhavi Sharma?
We have a great rapport off screen where we help each other, as well as pull each others legs and have fun all the time.

Were you reluctant to take up a show in Sony TV?
Actually I was really happy when the show was offered to me and did not even think about the other shows on Sony TV. And it was later that my friends reminded me about the shows that went off air like Baat Hamari Pakki, which we replaced. They also told that shows like CID and episodics work on the channel. But now I am just concentrating on my character and trying hard to put myself more into the character because, I feel that I am not really putting enough which Dhruv really demands.

What do you think were the challenges when you took up the role?
When I was given the role I thought the role would be really simple to enact and I could portray the character well. But as I started playing the character, I realised that the role is not that easy to play. Dhruv is really outspoken to everyone whereas Manish is outspoken only to his family and close friends and that trait was a little difficult for me to portray. I did not have much difficulty in getting hold of the Delhi slang because I myself am a Sindhi from Rajasthan and we normally speak in a similar way.

Have you ever been compared to Ranveer Singh in terms of looks?
Initially people used to compare me with Hrithik Roshan and Ranbir Kapoor because they felt I look like them from sideways. And today it is Ranveer Singh.  I am really happy that they compare, but at the end of the day I like to be known as Manish Tulsiyani as that is my real identity.

Who is your idol in the TV industry?
I really do not have anyone like that because I am really into movies.

So what do you normally do on terrace?
Way back home I used to have a lot of fun with my friends on terrace where we used to sleep and fly kites during festivals.

Can you tell us something about yourself? Your upbringing and background?
I am from Rajasthan and we have a family business of Textiles in Bikaner where we have whole sale and retail markets. My dad really wanted me to join the business but I wanted to do something different for which dad had given me time for a year. Hence I came to Mumbai to look for a break.

How is your rapport with your co-stars?
I have a great rapport with my co-stars especially with Virendra Saxena Ji. Kiran Kumar Ji and him are great people to work with where they are ready to help any time we need.

What was the most struggling part of your life?
Frankly speaking I really did not have a struggling period in my life. I came to Mumbai in 2008 and as soon as I came here, I got a print ad assignment to do. After that I continued doing modelling and ads, but it was later that I realised that the time given by dad was over and I needed more time to settle myself. Dad granted me another year and luckily, it was when the assorted time was about to get over that I got in the show.

Many shows on Sony TV have gone off air lately; what is your take on this?
I know that daily soaps have not been into a long run when it comes to Sony TV, but I hope that the show does well and not go off air soon because the show is really good. And I believe that if a show goes off air, it should go only after the actors have made their mark and people recognise them so that they can be cast in other shows as well.

There are a lot of senior actors in your show, how has been the experience with them?
All are great and they are all fun to work with and I really feel comfortable acting with all of them.

saru.g 9 years ago u r the best suited to the role of dhruv

shivani003 9 years ago Wow its impressive that he got a show within a year :)

I have heard a lot of people struggle for years until they are given a real break! Good on u Manish!

scinerd 9 years ago Ranbir Kapoor okay maybe, but Hrithik come on! don't get on your high horse here. But he does look like Ranveer for sure. He's a good looking guy but Hirthik okay there buddy.

momma1128 9 years ago He is very right to be worried about what happens to fiction on Sony. The way BHPH, the show which brought fiction back to Sony, was trashed should worry every actor on that channel.
And despite attempts to say otherwise, BHPH did leave a mark on many viewers, as evidenced by many persons bringing it up time and again in articles whose main focus is not about that show. Myself included.

BlueJeans 9 years ago Great interview! We hope to watch you as Dhruv for a long time....good luck!

'Ishq Mein Marjawan 2' Actor Muohit Joshi To Debut as a ...
13 minutes ago

Fukrey 3 Team Kick-starts their Work ahead of Shooting; ...
40 minutes ago