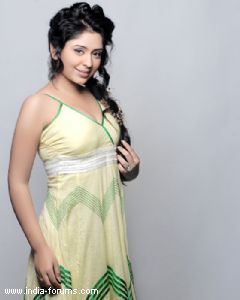 The beautiful actress Neha Sargam was last seen in Zee TV's mythological show Ramayan as Sita. After a mini break she was recently seen in UTV Bindass' show, Yeh Hai Aashiqui. The actress speaks to us about doing an episodic, offers which are there in her kitty and much more...

Coming back on small screen post her mythological show Ramayan went off air, Neha agreed to act in an episodic for Yeh Hai Aashiqui as the story of the show was very interesting, "Yes, I did an episode for Yeh Hai Aashiqui. Actually the makers of the show had approached me long back but due to my commitments I couldn't do it. When they approached me for the second time, I couldn't say no. The story was also very interesting and my show also had gone off air," she explains.

Neha says that she is looking forward to do some realistic shows and refutes to talk about the offers which are there in her kitty at present, "Well yes, there are some offers but until it is signed, I can't talk about it. Let's see what more is coming for me because now I want to do more realistic shows."

The gorgeous actress is not too keen on doing typical Saas-Bahu shows as Neha had already started off her career with a saas-bahu saga Chand Chupa Badal Mein as she says, "For now no saas-bahu sagas for me as I've already done that. I want something which has a good meaning or a moral like the episodic that I've done. Though one thing is for sure that I'll only do lead roles. Since the start of my career I've done that and will continue to do so."

When asked Neha if she has been approached for the upcoming series Ishq Kills or not? This is what she says, "Unfortunately till now I've not done that. Though I did receive offer for the same but as I was on vacation, I couldn't do it. However, if now I get an offer, I don't mind it."

We wish Neha good luck for her future endeavors!

rahulnivislover 6 years ago And yes you will . I'm watching ccbm again only because of u neha love u and I'm sure I'm gonna see u on tv wid a rocking new show very soon. Waiting )

lovely_lady 6 years ago I remember seeing Neha in Ramayan and was shocked when I realized she was the same girl from Chand Chupa Baadal Mein. Such a 180 degrees change. She was so beautiful, poised, and believable as Sita. Such a vast improvement. A true testimony as to how the entertainment industry can change a person for the better, looks-wise, acting-wise, and grace-wise.

exclusive
Exclusive Sara Khan to release her next song 'Bham Bhole'; says it's a ...
15 minutes ago