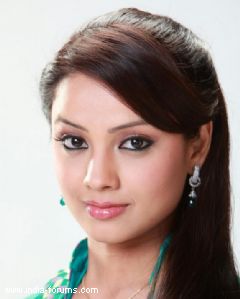 2013 was not a good year for the pretty looking actress Adaa Khan who lost her mother and then had to end her relationship with actor Ankit Gera. In conversation with TellyBuzz, Adaa shares her desire for the New Year 2014 to be a good one and her plans of coming back to TV...

Adaa wishes that the New Year will be a promising one and turns out to be decent for her as she says, "Yes 2013 was not a good year for me as I lost my mom. Also there was a lot of tension in my personal life. Well, I really hope and wish that this year, 2014 goes well."

She seems to be positive about coming back on-screen with a lead role and is not willing to do any episodic as of now, Adaa says, "My show Amrit Manthan too went off air in 2013 after which, I have just done an episodic here and there. Though now I don't want to do any more of that and I will definitely come back with a lead role very soon."

Having gone through a troubled and disturbing personal life, Adaa says that she wants to focus on the work right now and it will be her priority, "For now I just want to work and that's going to be my priority. I don't want to think of anything else and definitely there will be no new relationship for me. I'm happy of where I'm and I am looking forward for this year."

Presently Adaa is enjoying her break and is looking forward to work on a positive note, "As I said earlier... I would definitely come back with a show where I'll play a lead role. Thus, for now I'm not looking at doing a cameo or episodic. Let's see what comes to me. I would say that I'm on a break but it's just that I was not prepared to start soon. I had been busy resolving my personal issues. Now that everything is sorted, I'll start something soon," she concludes.

We wish Adaa good luck for her life and hope to see her on-screen soon!!

starsanjana 6 years ago She is too pretty for akit gera...dont meant to be harsh but she will find someone way better than him

nashragirl 6 years ago She only lost her mom! I guess dad alive

IamAditya 6 years ago All the best Adaa .. Waiting to see you soon

gurpreetnarota 6 years ago She is very Talented and Beautiful actress . im big fan of you

AmyPree 6 years ago Awww losing both parents so sad. She was so good as the evil sis in Amrit Mathan, all the very best to Adda.

sandiab 6 years ago i hope u have a good year as well Adaa so sorry for both her loses and i really wish her all the success in the world professionally and personally.

cooks09 9 years ago imran is good but r.k is better for sure.

But i totally agree that RK is better actor than Imraan.

Urmila Matondkar Does Not Regret, But Ready to Apologise for ...
11 minutes ago

Shabana Azmi speaks about recovering from her Devastating ...
34 minutes ago

Who is AK in Sushant's Unseen Video that has Surfaced? Watch ...
38 minutes ago