View Profile
Dheeraj Kumar's Creative Eye has been one of the legendary teams in Indian Television Industry.

With their path-breaking show Om Namah Shivay, they have the history of making shows that range from Mythos to daily soaps.

On the outset of the launch of Sawaare Sabke Sapne ' Preeto, Dheeraj Kumar speaks about the success of Creatve Eye and about their future ventures... 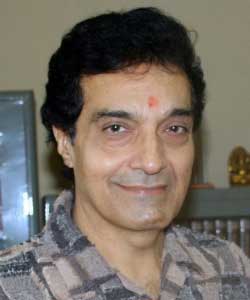 What was the thought behind coming up with a show like Preeto?
Preeto is a story about five sisters. People have seen that usually, the protagonist of the show will be either the eldest or the youngest daughter of the family.  But in this show the main protagonist is the third daughter of the family. When you have five daughters in a family, one of them has to take up the responsibilities of the son. Today there are situations wherein though you have a father and a mother, unfortunately they are not in a position to support the family. Hence we thought of coming up with a show with such a concept through which people can relate themselves to each of the characters and the situations.

Was there any special thought that went into this particular concept for Imagine?
The shows that were previously on Imagine were unique and special on its own. Take for that matter Baba Aiso Varr Dhundo and all the recent shows. But there was no such drama that was based on a joint family. This is the story of a girl who takes care of her four sisters and parents which any Indian can connect to. And I believe the if a story is connected to the audience and if the story is real, then  people will definitely accept it.

Is there a particular reason that you selected a Punjabi backdrop?
Mostly what we have seen is a Gujarati backdrop in most of the shows in television. Hence I thought I will make a show for Punjabi. I myself am a Punjabi and the language is really sweet. So you can call that as one of the reasons for the show to have a Punjabi backdrop.

Creative Eye has been very successful even in this competitive scenario. What is secret that you have?
Creative Eye has been making shows since 1984 and we have made shows for nearly 7000 hours ranging from Mythos, historical, fiction, family, comedy and we have even tried our hands in Sanskrit language. Creative eye has got a strong foundation and expertise under one group and in-house people are always together where we are determined. As far as competition is concerned, then I always welcome competition. I feel sober when there is no competition and I love to compete with youngsters.

How else are you preparing for the year 2011?
We are coming with Babosa Mere Bhagwan on Sony TV, which is inspired from a true story. Then there is Neem Neem Shehed Shehed which will launch on Sahara One. In terms progression, we have acquired our rights in films and its distribution, we are also into ads. I believe that you just have to do your duty and you will be rewarded. But you should have proper thoughts and understanding with most importantly, the blessings of the almighty.

You have also been a successful actor; will we see you again on any of your shows?
You might probably see me in a film soon.

Om Namah Shivay has been in Sony TV and Babosa is also for the same channel. Do you select channels according to the concepts?
No, not at all, we just actually think about the concepts and we approach channel.

Personally, how much are you involved in your shows?
I am involved in every aspect of my show including the casting and even the technical aspects.

9 years ago I have seen two episodes of Preeto.It is simple family story.Ankita acted well in this serial. It will do well

+ 6
9 years ago ankita is good with her character but somewhere the show fails to pull audience.