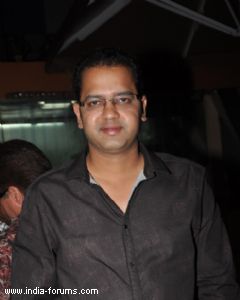 Today is the grand finale of Nach Baliye season 6. While earlier we saw Rahul Mahajan doing acts on the show, his baliye Dimpy Ganguly Mahajan who was also his dance partner in Nach Baliye season 5 will be seen on the show tonight. Telling us more about it Rahul says, "Dimpy is doing an all girls act which has already been shot. There will be 2 girls from this season and 2 from the earlier season. Since I have done acts for the show earlier and there was nothing for me in this act you will see only Dimpy in the finale tonight."

Rahul was recently seen in Colors popular show Comedy Nights with Kapil and he has shot for one more episode he says, "I have shot for two episodes for Comedy nights with Kapil and enjoyed doing both of them. Both the characters are different and so are the stories. When I reached the sets I asked for the script and they said there was none since I had nothing to say as a mute character. Then we did some extraordinary get up to become a dulha and I added the mooch and all to make it more exciting. In my next act that you will see I will be playing a nawab and I have lots of dialogue in fact shero sayari too. Whenever they call me next I will be more than happy to be a part of their show as it was great fun!"

He has done quite a many reality shows and we ask him what he will be doing next? "I don't know... I have never planned anything and I enjoy life as it comes. I believe that life has to be enjoyed no matter how it turns out to be. We cannot be sitting here and making plans as it is only God who makes the plans and decides what is going to happen with us.

I have done almost all reality shows and only singing is left which I will never attempt since I cannot sing at all. Singing is very, very different from the rest of the talent you can display. You have to be trained, you have to practice and be good at it. I am not even a bathroom singer. I have no andaaz of sur - taal at all. In fact I think singers are very powerful people since everyone listens to a good singer very attentively and people even worship them."

There were recent reports about Rahul and Dimpy not getting along which Rahul brushes off as being mere rumors, "I don't even want to talk about it and give that article any importance since me and Dimpy are very happy and there is no problem between us. We share a very good relationship and I don't know why people try to make out as such. We don't bother or pay heed to such news since we know that we are happy."

The happy husband however is not planning any surprise for his wife as the Valentine month starts, "I am not into festivals or Valentine either since I feel that jab mann kare valentine celebrate karna chahiye. But when it comes to be a romantic I am more of a drama queen than Dimpy and can really surprise her if I want to!"

-.Priya.- 9 years ago but i really love ranveer and anushka together
and wanna see more of dem !!!

minchi 9 years ago They will look rocking together.

-Miya- 9 years ago aww but Anushka-Ranveer are A-M-A-Z-I-N-G! I hope they sort out their differences and become fbesties again .. I adore their friendship. Anushka can bond with any guy, but I hope she knows that bonds like that of hers and Ranveer's are the forever types, or that it seems so.

Kangana Ranaut Vs Anurag Kashyap: Actress ‘Steps Back’ after ...
39 minutes ago