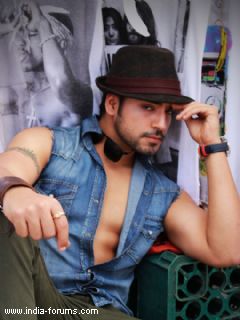 Good looking and talented actor Gautam Gulati who is winning audiences heart by portraying the character of Vikram in Star Plus' popular show Diya Aur Baati Hum is climbing the ladders of success. The actor has acted in an International movie for which he is getting applauded from all over. It's a short film named 'Coward' which will be screened at Cannes Film Festival.

TellyBuzz quizzed Gautam to know more about this movie from him.

Talking about the movie, Gautam said, "It's a movie about a guy whose mother was raped when he was a kid. Later, he was sent to London as he wanted to come back to kill the rapist. It's a short film of 22 minutes and will be releasing soon. This movie is co produced by Cinevistaas and Rose Milk Productions of London. There are some scenes in the movie where I have worked upon by myself. I have imagined the life of people living there and have worked on some of the scenes which weren't there in the movie. This movie is directed by Rakesh Mehta and he is a very good director. The DOP of this movie Stephen Bookas who is a very talented guy and I really had a good time working with him."

Gautam is happy with the appreciation he is getting from the people regarding his work in the movie. An elated Gautam told us, "Everybody loved the movie and appreciated my work during the screening of this movie.  This movie is going for Cannes and I am happy and very excited about it. It's an intense movie which got tears in everybody's eyes. After the screening of this movie, people came to me and appreciated my work. They told me that I managed to pull off the 22 mins of the film efficiently."

The talented actor has more movies in his bag. When we asked Gautam about it, he told us, "I have signed two more international movies. I have also signed a new Bollywood movie 'Fraudiye' which is directed by Rakesh Mehta only."

Way to go Gautam! We wish you all the best for your film!

AhamyTed 6 years ago u r just fab as Vikram...
all the best for ur upcoming film!!!

Divz. 6 years ago All the Best gautam