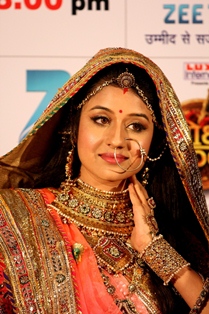 Paridhi Sharma, who is currently seen as Jodha in the show 'Jodha Akbar', recently spoke to us about the nuances of playing a historical character and how the comparisons with Aishwarya Rai Bachchan have only encouraged her.

Ever since I started playing Jodha, I have been getting a lot of compliments. I'm really happy and I feel blessed that people are appreciating me. I knew that people would compare me with Aishwarya (who played Jodhaa in the movie Jodhaa Akbar). I mean, from the beginning of my career, I am being compared to an iconic personality like Aishwarya.

I've even been called Madhubala
People have come and told me, 'You look better than Aishwarya'. People have even compared me to Madhubala. It feels great that my hard work has paid off.

Lot of hard work to do a historical show
The sets of the show are in Karjat, near Mumbai, so we have to stay there. Apart from that, I have to wear this heavy jewellery and attire which is quite a task. You have to learn so much. I trained in martial arts, sword fighting and horse-riding. It's quite different from what daily soap actors do. But at the end of the day, the show is giving you so much, so you have to make that sacrifice. In fact, it's been really long since I have been to my hometown Indore to meet my family. But whenever my parents get time, they come to visit the set.

I've had my share of struggles
Since childhood; I've had a passion towards art - painting and dance. After completing my MBA from Pune, I realized that marketing was not my cup of tea. When people would ask me 'Why marketing', the answers I would give were not from my heart. Mujhe bahut fake interviews dene pad rahe thay. I found acting to be the best medium to portray myself. I went to Mumbai, started struggling, and meanwhile, also did a lot of theatre.

stephhh 6 years ago how no one compared Rajat with Hrithik??

Paridhi u r perfect for Jodha...love ur acting...Paridhi as Jo forever

ann2012 6 years ago Paridhi Sharma is amazing. The grace which you bring to Jodha's character is unmatched.

lajni 6 years ago paridhi u looks so perfect in Jodhaakbar

jodah 6 years ago Paridhi Sharma i become your fan after watching you in Jodha Akbar.

xitijj 6 years ago paridhi, like ur acting in jodha akbar...

shahbhavini 6 years ago Some time when Paridhi smiles she looks like Madhubalal... I love JA...

Parth Samthaan: Kasautii Zindagii Kay has shaped me as an ...
22 minutes ago