View Profile
After portraying the arduous character of Bhaiyyaji, Ashish Sharma is portraying the magnanimous role of Chandragupta Maurya on Imagine TV.

Ashish has taken up a role that Rushiraj Pawar has stamped in the minds of the audience. What were the challenges that Ashish faced when he stepped into the highest rated show on Imagine TV?

In an exclusive conversation with TellyBuzz, Ashish speaks about his role in the show... 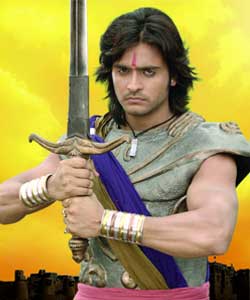 How do you feel being back on small screen?
It is great to be back on the sets and I cannot imagine not being associated with a show sitting idle.

You are portraying a character which Rushiraj has created as the benchmark. Now the responsibility is on you.
Yes Rushiraj has done a fantabulous job and I have met him before he left the show. Rushiraj has left behind the job to me and thus the responsibilities are really high. Sometimes I really feel scared because people have the double expectations now.

Chandragupta Maurya is Imagine's highest rated show. How do you feel being a part of it?
It feels really great to be part of such a great show and the fact that it is the highest rated show makes me even more responsible. But frankly speaking I have never really given concern about the ratings because you do not know the criteria on which it is decided.

You are portraying the title role of the show for the first time. Were you nervous?
Not really, because at the end of the day I am portraying my role and finally doing my job. When somebody shows faith in you, the determination automatically comes.

There are a lot of stunts in the show; how are you preparing yourself for the character?
Since there are stunts I have got myself trained in Tai Chi and Kalaripayattu, also I have learnt horse-riding as well. Besides that I have read a lot about Chandragupta Maurya mainly the Greek History because it has more details from his point of view. Indian history has mainly dealt about Chanakya and his ideas.

What was the main challenge when you started doing the show?
The main challenge for me was being an individual I should not, in any way, resemble to the earlier character that I have done. For that, I had to work on my body language, my physique and my complete appearance. Since Chandra Gupta is a complete street kid who had learned everything through guerrilla warfare, I tried to take inputs from the character of Dastan from the movie Prince of Persia. To give a rough look, I grew my hair as well. First we thought to show the character bare chested, but later on we fitted the armour for the tough look.

How is the experience working with Manish Wadhwa?
He is a brilliant actor to work with. We play a lot of pranks on the sets and since he could not do it with Rushiraj, he is fulfilling his wishes with me (laughs).

Your promos have been really alluring. How has the response been?
The response has been mind blowing and I am glad that people are liking it.

How is the experience shooting in Baroda?
It is raining here and I was down with Malaria for some days. I do not have problem adjusting with the food because I have a restricted diet and cannot have anything and everything.

Any memorable incidents so far?
Actually I have not yet shot much to have memorable experiences. Perhaps after a few episodes I would be able to tell that.

Now that you are portraying the character of Chandragupta Maura, what is the quality in him that has attracted you the most?
Chandragupta Maurya was a great student and that one factor has really caught me. He strongly believes in the philosophy that one has to be a very good student.

After Gunahon Ka Devta, was it tough for you to get out of the skin of Bhaiyyaji as he was also a fearsome character?
It was tough initially because once you have lived that character for a long time it definitely is difficult to get yourself out of it. But now I have come out of it and purely concentrate on portraying Chandragupta.

What would you like to say to your fans?
I would like to tell them to keep watching the show and I will try to give them better always. I love you all.

Haridas 5 years ago Ashish Sharma your silence is killing us. Pls reveal something of your upcoming show. When we may expect you back on screen...

Sidda8 9 years ago Thanks for Ashish's interview. He has been working hard to overcome his bhaiyyaji avatar and become Chandragupta Maurya. Ashish, I have great faith that you wouldn't let anyone down. Best of luck.

mihali7 9 years ago l love his answers!!! They are so straight to the point. Man with such great confidence...i love him&lt;3

joliefille 9 years ago nice interview, wow Manish ji n Ashish is having good times together, nice to know it, m sure very soon He will make all happy by his hard work. m happy to know all's view n sorry for the dislike its just by incident n i don't know how to remove it.

captkirk 9 years ago CGM is a great show. With the leap, the real story begins now & with u playing the title role its even better.
(its gud & rare to see tht the producers had enuf sense not to drag the child's story).
Best of luck, ashish. U luk perfect.
Finally we r seeing sum gud fight sequences & realistic horse riding. I believe u will emote well too.
Jst one thng, I'm more interested in watchng cgms story of unifying india than sum stretched luv story.
We r soo ready to be even more entertained by CGM now.

mauve 9 years ago CGM is a great show. With the leap, the real story begins now & with u playing the title role its even better.
(its gud & rare to see tht the producers had enuf sense not to drag the child's story).
Best of luck, ashish. U luk perfect.
Finally we r seeing sum gud fight sequences & realistic horse riding. I believe u will emote well too.
Jst one thng, I'm more interested in watchng cgms story of unifying india than sum stretched luv story.
We r soo ready to be even more entertained by CGM now.

Ritu278 9 years ago Thnx for the interview and all the best...CGM rocks

adutta94 9 years ago Yes i agree rushi did a mind blowing job as CGM and did full justice 2 his character CGM. whether it's emotionally or physically, he made the character shine and made him very realistic. as for ashish, guys all i'd say, ashish is also a good actor bt u knw wht we all got so used to rushi tht the change all of sudden is hard 2 digest. however, i'd say tht we should nt be so judgemental abt ashish and let him show his talent as well. we as viewers should understand the fact it takes a while for a actor 2 really dive into a character n portray it as realistic and as fluent as possible. i dnt knw y bt i think ashish will do justice to CGM like rushi did bt it'll take some time. we prob cannot expect rushi in him bt still he might do a great job as CGM. so it's my request 2 all rushi fans lyk me tht pls give ashish some time 2 dive into the character of CG n become CGM physically n emotionally like rushi. btw, i also love rushi. so dnt think i'm being biased here. i jst feel tht, it takes time 2 adjust 2 changes. therefore, we should hav patience and faith in the actor tht they can do their job with great effort and they will do justice to the character. sometimes faith tht a specific actor might be able to accomplish something or portray a character soo realisticly tht totally stunns us viewers just like rushi did. besides, the journey frm bhaiyyaji to chandragupt sounds good 2 say bt in reality it's hard. we dnt knw hw much an actor is working hard 2 do justice to their character. therefore, i request pls give ashish some time 2 shine through the character of CGM. he might do mistakes initially bt at the end of the day i'm sure we'd all love ashish as CGM. every actor has their uniqueness tht separates them frm others. rushi and ashish also hav their own uniqueness n own way of portraying their characters. therefore, comparing them wud be a great insult 2 their talents n their uniqueness. anyway, this ws jst my opinion. to be continued..editDate>2011...