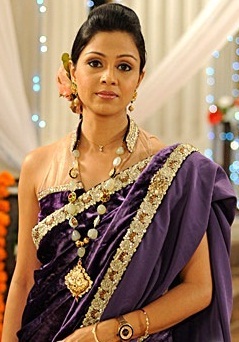 Manasi Salvi who is seen as Avantika in Star Plus show Pyaar Ka Dard Hai...Meeth Meetha Pyara Pyara... is all set to bid adieu to the show. The actress for the first time talks about the reason behind her this decision.

When asked to Manasi about the reason of leaving the show, she says, "I just needed some break. It is like you get bored of doing the same thing. Also off late things were not happening the way it should have happened. As an actor I need some change."

So is it because Manasi was unhappy with the way her character was shaping up and this is what she says, "Well somewhat like that. Actually the show is very good and my role too was nice but what happens is that as an actor one should never feel secure. If this happens, then you stop growing. So the latter happened in my case."

After working in a daily soap for more than a year, Manasi wants to relax for a while and then plans to come back in another show. When we asked her about the break, she says, "Yes, for a month may be. I would just rejuvenate myself, get in shape and will come back with another show and may be in a new avatar. Though currently I don't have anything in hand but I am hoping that 2014 brings a lot of new things in my life."

+ 2
7 years ago This will upset us tremendously...I loved Avantikas character the most

7 years ago avantika was a fashionista loved her sense of style... flawless acting too .. will miss her.. all the best on your next venture x

+ 3
7 years ago Will miss you Manasi you were one of the biggest reasons why I fell in love with PKDH! You defined Avantika and you were a fashion and acting queen! Your style, charisma will truly be missed! Don't know how to take this news but I wish you all the best for your future projects and will always remain your fan!

+ 5
7 years ago OH MY GOD...Completely shocked...i wish its just a rumour but I admire Mansi ji's decision alot...she is a great actor and a good friend ...I will miss you as Avantika.

bawejagarima54 7 years ago Nooo!!! Your the reason I watch this, you make every episode with pure elegance and passion.. I'm devestated to hear about your upcoming conclusion... Let Anuj give his kidney to Preeti!! Listen to Harish and don't donate your kidney!!

+ 2
7 years ago Very shocked and saddened by this news! She did a brilliant job as Avantika and portrayed her character flawlessly!! Im damn shocked still about her leaving! Wish her all the best of luck in the future!! Im sure whatever she will do is going to be amazing! :D

7 years ago Mansi mam was the best thing about the show. Never seen such a strong and no nonsense woman on the telly. And such a gorgeous woman.
Used to watch the show only for her. Her scenes were the highlights- such poise, such charisma. Evryone else is way too melodramatic.

+ 4
7 years ago This is such sad news! Definitely going to miss seeing a strong character, and a beautiful woman. Wish you the best in life.