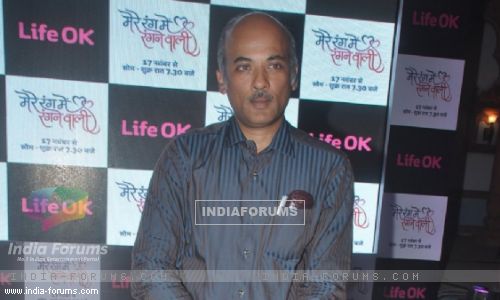 Rajshri Productions' known by all is one such production house which has made its name in bringing up shows with concepts out of the box. Well, today we have with us the mastermind behind all these shows - Sooraj Barjatya. The saying, some good things end for some better things to come up and here in this case the saying is absolutely apt. With Pyaar Ka Dard going off air in November, production house is back with a fresh concept in the same month. In this exclusive chat, we have Sooraj Barjatya talking about his upcoming show and much more. Read on and Have fun!
We have always known you and Rajshri Productions coming up with peculiar concepts be it Woh Rehne Waali Mehlon Ki on Sahara One or Pyaar Ka Dard Hai...Meetha Meetha Pyaara Pyaara... on Star Plus. So how different is Mere Rang Mein Ranganewali from others?
Essentially, the main aim again is always in our films or in our shows is to show the strength, the importance of the family. Whether we accept it or not, all of us are social beings and we all want to be wanted by others. The aim is to show where you do not have villains, vamp. The major aim was to serve the audience with a show where you can question day-to-day life and also address it correctly. Mere Rang Mein Rangnewali is a young show where a boy and a girl make mistakes like any other normal being. Accidentally they get married. So technically they are married also but they are not married also and like today's generation, they accept their mistake's without being judgmental. We are going to question every bit of day-to-day life through our show. Viewers will get to see each individual in spite of being right in their way, they have a variation in point of views. All of them together are trying to find solutions.
Viewers after a long time will get to see a lot of Rajshri faces coming together in the show. What do you have to say about that?
Honestly, casting them just happened. When we developed the roles and the actor that first came into our mind was Alok Nathji. Mahesh Thakur, Harsh, Suchitra Bandrekar have been very loyal to us. The role of Renuka Shahane was written just a few days before the launch. When we called her up, she without thinking twice just agreed to doing it. It is a small role but a very important one. It is just like a blessing to us to have such veteran actors in our show. When we know someone since so many years, it actually helps as they know about the functioning and every little nitty-gritty about the production house. More importantly, these are actors who actually deserve these role and characters. Furthermore, I can sense the feel that everything is going right.
Lastly, any message to your fans regarding your upcoming venture?

I would like to convey to all my audience that do watch this show. It has a fresh concept, a fresh love story between a young boy and a young girl. There are a lot of minute messages incorporated in the show that as a family can sit together and watch.
Rajshri's Mere Rang Mein Ranganewali surely sounds quite interesting. TellyBuzz wishes all the luck to the team.
Upasana Patel

6 years ago Sir,We want PKDH2 with same pair and cast.Please make it possible as SP ended such a beautiful show PKDH though getting high trps and hit with the masses.

+ 2
9 years ago Of course this is to bring Salman down what else can they do other than this cheap tricks any ways when he was not even personally involved in this matter how come FIR has been filed against Salman...Crazzyyy

9 years ago anyone working to protect Salman will not kno any tom dick or harry is safe to get close to him.. Shera n all others were doing their job! kisi k face pe toh nai likha woh kaun hai...duh

shahidzlover 9 years ago why r people always after Salman... like seriously... everyone has to target Salman all the time...
He can not do this at all...