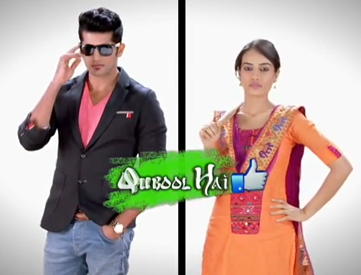 4 Lions Films' popular show Qubool Hai aired on Zee TV is in the news these days for going through some crisis because of which the show might be pulled off air.

The show took a good start when it started as the audience liked the chemistry between Asad and Zoya. Also the main reason of the show garnering good numbers was because of TV's heartthrob Karan Singh Grover impeccable acting skills. But things got haywire when Karan Singh Grover made an exit from the show citing the reason of his other commitments.

After Karan's exit, RaQesh Vashisth was roped in his place. This move however, did not go well with the viewers as it affected in the TRPs. But people liked RaQesh and Surbhi's chemistry too.

Now the show has taken a leap replacing all the old characters except Surbhi Jyoti, Shalini Kapoor Sagar and Amrapalli Gupta. Karanvir Bohra's entry in the show as Aahil has resulted in an increase in the TRP ratings. As per the news circulating that the show is facing some financial crisis because of which the actors are not getting paid their dues on time, so there are chances that the show might go off air in the month of August.

We got in touch with Shalini Kapoor Sagar who is seen as Dilshad in show Qubool Hai. We asked her about whether is she facing any such problem or not and if the show is going off air in  August or not? She says, "My relation with the company is very good and I am not facing any such problem. I don't think so even others are facing such problems but I can't comment on that. As far as news is concerned about the show going off air then I will say it's all rumors as the PRs and the creative are working hard to make the show better and better. The show's TRP is also good and I don't think that the show with such good TRPs can be pulled off air."

Well, we wish good luck to the team of Qubool Hai!

6 years ago I don't give a dam weather it goes off-air or not because I've quit QH with KSG.

6 years ago It better not go off air, Aahil has not confessed his feelings for Sanam and Sanam has not fallen in love with him yet.

Sanams twin Sehre has not made her entry yet and I hope she is not Sanams identical twin as it would be weird, Sanam is her mums look alike and you can't put a third look alike, it will be like triplets.

Should have given her a twin brother instead who would have been a split image of Zoya and Asad.

This show can't finish without all this.

+ 3
6 years ago love u karan singh grover!! come back soon with a bang!

6 years ago Karan Singh Grover you are the hotttest Actor...Love you!~~~