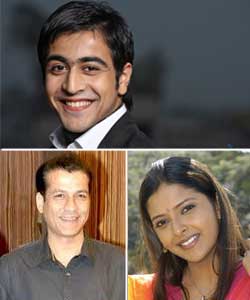 Gurmeet Choudhary and Kratika Sengar returning to Zee TV with Punar Vivah has been the talk of the town for quite a while. Along with these celebrities, a few more names are expected to make their comeback to the small screen with the show.

The latest we hear is that Dishank Arora (Sony TV's Kismat), Chetan Pandit, last seen in Star Plus' Maykee Se Bandi...Dor, Samragyi Nema (Santaan fame) and Rakesh Kukreti would be making their comeback with the Zee TV show.

A source informs, "Dishank Arora would essay Siddharth's younger brother while Samragyi Nema would essay a busy working lady who has no time for her personal and family life. Rakesh Kukreti would play Samragyi Nema's husband in the show. Chetan Pandit would probably be seen in an elderly role in the show."

We contacted Dishank Arora who asserts, "Talks are on and nothing is finalized yet."

Samragyi Nema too confirmed the buzz but refused to divulge any further details.

All our efforts to reach Chetan Pandit and Rakesh were in vain!

With many actors set to make their return, the excitement level of the show just went a notch higher.

vivify 8 years ago Waiting to see your amazing acting yet again Guru.
Wish you get loads n loads of success n happiness in life Gurmeet
Thank you for all your hard work for your fans

SSS85 8 years ago Wish the entire team of Punar Vivah all the best, put in your best
All the best Gurmeet, love you.

VersatileStar 8 years ago Gurmeet I want your hard work and talent to be justified. Bless you.
Keep Smiling and take care

conch 8 years ago I believe in you and your talent, would love to watch your work.

VersatileStar 8 years ago Looks like a big cast and story of couples.

All the best Guru, will watch it for you

GCBEST 8 years ago Love and appreciate your hard work, dedication and passion for acting Gurmeet
All the best