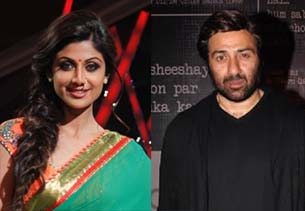 Bollywood actress and producer Shilpa Shetty is glad that actor Sunny Deol is part of her "Dishkiyaaoon" first production venture, saying it is a "big thing" for her.

"We will reveal more details soon but right now I am very happy with the response to the trailer. Till now I have worked with Sunny Deol and now he is working in my first film. It is a big thing for me," the 38-year-old said here Sunday at the Worli Food Festival.

Shilpa further said that she never expected her first film to be an action movie.

"The film is good. I never thought that my first film will be an action-mystery. I always thought that if ever I make a film it would be a comedy or a love story. But I loved the script of 'Dishkiyaaoon' so much that I wanted people to know the story," said Shilpa.

Meanwhile, her husband Raj Kundra revealed that they have a trump card which Shilpa will reveal at the right time.

"There is a hidden secret which Shilpa will come out with soon. It is regarding the promotions, we have a trump card," said the businessman.