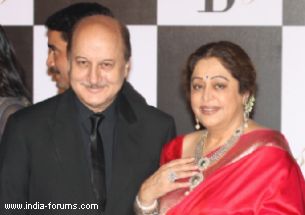 Anupam Kher says neither he and nor his wife Kirron Kher were disturbed when she was greeted with eggs and black flags on her arrival in Chandigarh as the Bharatiya Janata Party (BJP) candidate for the forthcoming Lok Sabha elections.

Kirron landed in Chandigarh on Tuesday. She was reportedly greeted with slogans and had eggs thrown at her by protesters who felt she was an "outsider".

Anupam, who was with her in Chandigarh by chance, laughed off the importance given to the protesters.

"There were just maybe seven to eight protesters...a very negligible number of people. And I say, everyone has the right to protest in a democracy. Neither Kirron nor I minded the protest," he said.

But why the protests?

"They probably felt there were others more qualified for the tickets. But they must understand that if the high command thinks a particular candidate is eligible, then we must all respect that decision and not throw tantrums, like a child who has been denied a toy," said the veteran actor.

Anupam dismissed the enormity of the protests.

"It was nothing. So much hue and cry is being made about a handful of protesters. What about the 500 supporters came to support and cheer Kirron at the airport? As for reports that eggs were thrown at her, please show me those eggs. I'd like to make omelettes of them," he said.

Anupam says his wife is not the least shaken by the protests.

"She is a strong woman, She is getting ready for a long innings in politics," said the actor, who has "no plans of ever getting into active politics".

"One politician in the family is enough," he quipped.

Anupam was in Chandigarh to promote his film "Gang of Ghosts", which releases Friday.

"What a beautiful coincidence. I am glad I could be here to see my wife take her initial steps in this new phase in her life," he said.