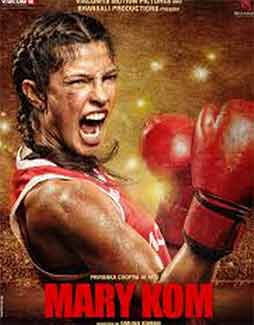 "Mary Kom" co-producer Sanjay Leela Bhansali is overwhelmed by the impact of the trailer of the film. He agrees that Priyanka Chopra, who plays M.C. Mary Kom onscreen, doesn't resemble the Olympic bronze medallist boxer but says the actress has captured the star athlete's "soul" for the role.

"We wanted to tell Mary Kom's story. Her life has everything. Drama, passion, valour, warmth, humour. Her story was waiting to be told on screen. I am honoured that we are doing it," Bhansali said.

The trailer shows Priyanka in a state of unconditional surrender as the Olympian boxer. The Manipuri accent is not overdone and neither are those pugilistic postures where she boxes like an untamed cat in the ring with her immediate adversaries and other far less definable enemies outside the boxing ring.

There is her troubled relationship with her father, and her boxing guru. And then there is the tender romance with the man in her life, played by a fine actor, Darshan Kumar.

Said Bhansali: "Now that we've completed the film, it is impossible to imagine anyone but Priyanka playing Mary Kom. She has lived the role. She breathes life into every pore of the character. There are other very fine actors in the film, chosen because they suit the role."

The only doubt raised by the trailer is that Priyanka does not physically resemble the real Mary Kom.

Defending the team's choice of Priyanka for the lead part, Bhansali said: "I don't think the physical resemblance is as important as capturing the soul of the person that the actor is portraying. How much like Charlie Chaplin did Robert Downey Jr look in 'Chaplin'? Did Meryl Steep actually resemble Nora Ephron in 'Heartburn', or Robert De Niro...did he actually look like Al Capone in the 'The Untouchables'? Or Van Kilmer in 'The Doors'...did he actually look like Jim Morrison? No.

"It's the core, the essence of the personality that matters. And Priyanka has captured the soul of Mary Kom."

"The trailer is bull's eye and the traction we are seeing on digital shows strong engagement. Two rounds won and the match is set up."

The movie is releasing Sep 5.