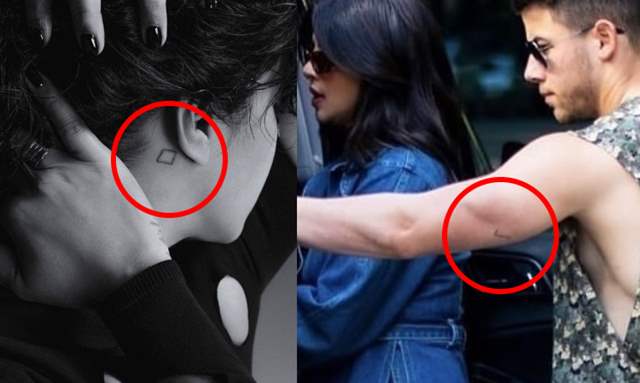 Priyanka Chopra got married to Nick Jonas in a dreamy wedding in December 2018. The couple has been shelling out major couple goals with all their mushy posts on social media. During a recent interview with Elle, PeeCee revealed the meaning of the identical tattoos they inked on the occasion of their first engagement anniversary.

The tattoos are barely visible and The White Tiger actress revealed that she got one behind her ears and hubby Nick Jonas has it on his arm. Revealing the meaning behind them, Priyanka said, "When we got engaged, Nick told me I checked all his boxes. So on the one-year anniversary of our engagement, we got matching tattoos to celebrate that: mine behind my ears, his on his arm – it’s a check on one side and a box on the other."

While the couple is embracing their married life, they are often quizzed about starting a family and having kids. Recently, during one of her recent interviews, PeeCee said a yes to having kids with husband Nick and also joked that she would like as many children as a ‘cricket team.’

Priyanka was last seen in The White Tiger, which is directed by Ramin Bahrani, adapted from Aravind Adiga's 2008 novel of the same name. The film stars Adarsh Gourav, Rajkummar Rao and Priyanka Chopra Jonas. The film will release on Netflix on 22 January 2021.

Priyanka Chopra has revealed that her husband Nick Jonas and she got matching tattoos on their first engagement anniversary. Priyanka and Nick got engaged on July 20, 2018.