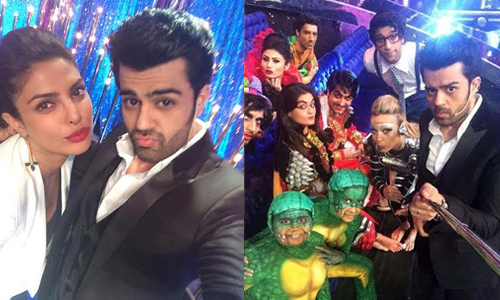 Colors popular dance reality show Jhalak Dikhhlaa Jaa Season 7, as the competition enters its twelfth week the competition is heating up by every passing week. The challenge for this week is costume drama. Living up to the theme, Akshat Singh was dressed as a crocodile, Sophie Choudry as a cat and Shakti Mohan as a caterpillar. Along with super exciting performances, Priyanka Chopra will be seen as the celebrity guest of the show.

Well, with a celebrity guest coming on the sets of Jhalak, there has to be some kind of drama that will leave the viewers laughing on the floor, haina? Priyanka Chopra had challenged one of the hosts of the show, Manish Paul for pull ups and to everyone's surprise Priyanka won the challenge. This would surely be a great watch for all the viewers, isn't it?

Second fun news we have for you guys is that there will be a tug of war between Priyanka Chopra and Akshat Singh and our chota packet, Akshay will win the competition.

Third good news is Akshat Singh yet again gets the performer of the week tag.

All of the above news is confirmed by our much reliable source.

Keep reading this space till we bring to you more details on your favourite shows.

lilac_dreams 6 years ago Shakti Mohan will rock the caterpillar act as well as Ishq Bulava act!!!!

lilac_dreams 6 years ago Shakti Mohan will give brilliant performances even when she is hurt!!!

krarshanaval 6 years ago keep rock in the dance... awesome it will be... love u shakti mohan

KriYaansh960 6 years ago Love you Shakti Mohan ! Can't wait for your performance ^_^

moon_cupcake 6 years ago Shakti Mohan you are simply the best...love you

Angelic.x.Chaos 6 years ago love you shakti mohan youre the best
:)

Shukti_19 6 years ago Shakti Mohan, U Rock
love U Diva..
never knew a Caterpillar can look so cute :*
excited to watch her act