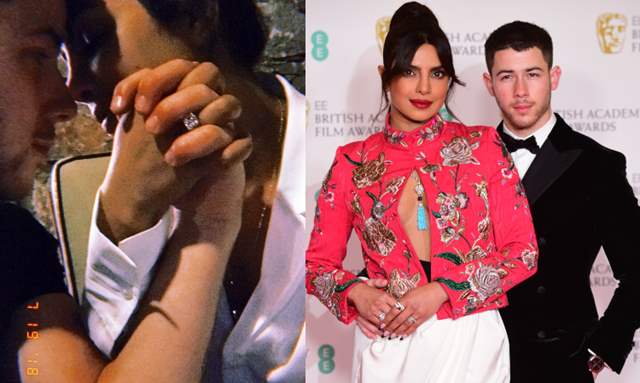 Priyanka Chopra got married to Nick Jonas in a dreamy wedding in December 2018. The couple has been shelling out major couple goals with all their mushy posts on social media.

The two met for the first time at the Vanity Fair Oscars party in 2017 and this was the first milestone in their forever love story. Hence began the one of a kind love story. For the uninitiated, Nick Jonas had proposed to the actress on a trip to Greece. PeeCee and Nick are celebrating their three-year proposal anniversary today.

Priyanka marked the special occasion by sharing a romantic picture as she wrote, "My everything.. 3 years today.. Seems like a blink and a lifetime at the same time. I love you."

Meanwhile, Nick shared a selfie of them enjoying a meal and his caption read, "3 years ago today (ring and heart emoji)". Reacting to her hubby's post, PeeCee dropped a comment saying, "Thank you for asking jaan."

In a previous interview with Vogue, Nick Jonas had shared details about the romantic proposal as he said, "I got down on one knee, again, and said: 'Will you make me the happiest man in the world and marry me?' No joke-she took about 45 seconds. 45 seconds of silence.' Of course, it ended with her saying yes."

During a recent interview with Elle, PeeCee revealed the meaning of the identical tattoos they inked on the occasion of their first engagement anniversary. The couple who got engaged on July 20, 2018, inked themselves with a box and tick mark on the same date in 2019.

The tattoos are barely visible and The White Tiger actress revealed that she got one behind her ears and hubby Nick Jonas has it on his arm.

Revealing the meaning behind them, Priyanka said, "When we got engaged, Nick told me I checked all his boxes. So on the one-year anniversary of our engagement, we got matching tattoos to celebrate that: mine behind my ears, his on his arm – it’s a check on one side and a box on the other."

On the Bollywood front, Priyanka was last seen in filmmaker Ramin Bahrani's 'The White Tiger' co-starring Rajkummar Rao and Adarsh Gourav. While she is currently shooting for her Hollywood projects, she is yet to announce her next Bollywood film.

On the other hand, Priyanka Chopra has a few Hollywood projects in the pipeline which include, director Jim Strouse’s ‘Text For You’, Indian wedding comedy with Mindy Kaling and ‘Matrix 4’ with Keanu Reeves followed by a film based on the life of Maa Anand Sheela in her kitty.