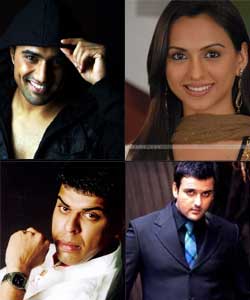 TellyBuzz was the first to report about Imagine's next historical venture after the success of Chandragupta Maurya in Sagar Pictures' Dwaarkadheesh.

Its already out in the media that the chocolate boy Vishal Karwal has grabbed the prized role of Lord Krishna in the show.

We now hear that Priya Bhatija who was last seen in Imagine's Baba Aiso Varr Dhundo as Sudha has been roped in to play the beautiful Rukmini.

A little birdie tells us, "Priya Bhatija has been finalized to essay Rukmini. Dwaarkadheesh will depict the least talked about phase in Krishna's life, that is about the divine love story of Krishna and Rukmini. Vishal Karwal has already shot for the promo which will go on air very soon. Along with Priya, Hemant Chaddha has been finalized to play the role of Balram. Renowned actor Murli Sharma who was last seen in Laagi Tujhse Lagan will play an important cameo".

We tried calling Priya Bhatija, but she remained unavailable.

Murli Sharma on his part told us, "Talks are still on and I can talk about it only after few days. If an interesting cameo comes my way, I usually grab it as that is the least I can do on TV at the moment".

The shoot of Dwaarkadheesh will commence from 12th June at Baroda.

they casted her now ,in the promo they just took any common girl to shoot only for promo :)
from any angle she was not priya

+ 4
9 years ago As for Krishna, Sumit Vyas would have been a good choice here

9 years ago Hope the show will be as good as CGM now.

+ 3
9 years ago OMG, I'm excited. I love Sri Krishna and feel blessed to see a show based on his epic. The Mahabharata rarely showed Rukmini and now we will see her story and her pure love for her lord. I hope they start off with Rukmini's swaymvar and her elopement with Krishna.

+ 6
9 years ago I saw the trailer, and I'm not liking the faces of Krishna and Rukmini. There's no divinity in them, especially Rukmini. :(

9 years ago i too feel priya isnt a good choice for rukmini ... could have had some new actress to play this role ...
somehow they could have depicted some other phase.. instead of love stories of Gods :S

9 years ago i donno y stars do agree to launch der shows on imagine after knowing all dat...
dey hav taken our kmh from us missing arjun n arohi sooo much