View Profile
‘Superstar’ is an action drama based on the reality of the entertainment arena and comes with the tag line ‘If you have a dream, protect it, even from yourself.’

The film’s story revolves around Kunal (Kunal Khemmu) who believes that life is essentially about choices. Kunal defines the youth of today – he dares. He dares to dream of making it big in Bollywood one day. Here Kunal Khemmu is playing a double role.

Kunal wears the tag of a Bollywood struggler lightly, as he knows it's only a matter of time before he will make it into the big league. Until, that is, life decides to play a prank on him. The entry of the rich, debonair Karan in Bollywood as well as his life, crushes all of Kunal's dreams.

And suddenly, the struggler is transformed into a superstar. Public adulation and unwavering media attention, he receives it all. What would Kunal choose at the moment of reckoning –Truth or Dare? If you are getting curious, wait and watch ‘Superstar’ that will be releasing all over shortly.

‘Superstar’ directed by Rohit Jugraj and produced by Shree Ashtavinayak Cine Vision Ltd has Tulip Joshi and Aushima Sawhney opposite Kunal Khemmu. The other artistes include Reemma, Sharat Saxena, Darshan Jariwala, Kishorie Shahne and Aman Verma. While Shameer Tandon has scored the music for ‘Superstar’, Rahul Singh and Sudip Sharma have done the screenplay and dialogues. -(SAMPURN) 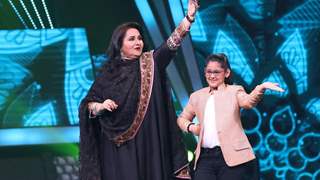