This Friday heralds the beginning of the “chakravyuh” round which in turn means there will be a lot of suspense, fabulous performances and some heartache as well. In the ‘Chakravyuh” round only two participants –one male and one female will be selected from the six participants, while the rest get eliminated. This episode will also introduce us to the next Mahaguru for the contest – Anandji Bhai of the famous duo: Kalyanji-Anandji. 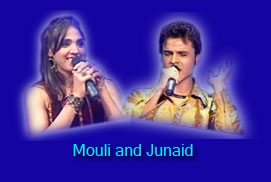 Performance wise Friday’s episode promises to be a viewers delight and we will probably see some of the best performances thus far and there will indeed be some tough competition. In the first round despite brilliant performance two get eliminated. The two unfortunate ones to get eliminated are –Wasi Effendi of “Yalgaar Gharana” and Sumona Ganguli of “Hit it” Gharana. Wasi’s elimination upsets Ismail Darbarji and his reaction is quite visible.

In the second round the competition gets even more fierce and all participants give such great performances that the Judges are left without a judgment as they cant decide who to keep and who to let go! Seems they got into a “chakravyuh” instead! So they request the participants to sing a common song on which the judgment would be based and the final verdict would be given. Mauli and Junaid get selected and reach the Agnipareeksha round while Shrestha and Harpreet get eliminated and bow out of the contest.

It is most definitely a “must see” episode. 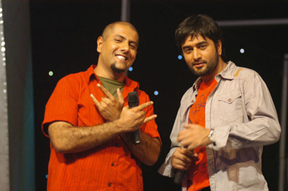 If Fridays episode was heartbreaking to see some very talented contestants go then in Saturdays show there is surely something to smile about, especially for some of the contestants! The tears of unhappiness of Friday most definitely turned into tears of sheer happiness on Saturday! For the first time in the history of a musical reality contest it was seen that a mentor(s) have offered a break to six contestants at one go!

The episode begins with Aditya Narayan asking Himesh Reshammiya about his new movie to be released shortly- "Aap ka suroor". Himesh tells everyone that it's a complete paisa - vasool movie and urges everyone to do advance bookings.


Today’s participansts in Charavyuh are: Rimi Dhar, Saberi Bhattacharya & Reecha Tripathi in girls; and Raja Hasan, Sunil Kumar and Amanat Ali in the boys. In the first round, Sunil and Reecha get eliminated. Amanat gives a stupendous performance. 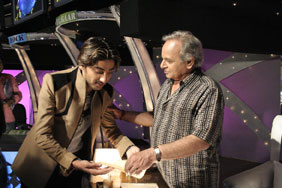 It is after this that Vishal and Shekhar make an announcement that surely cheered up the participants. Yes, it happened on the sets of Sa Re Ga Ma Pa contest for the first time that any MD has given a break to so many together. Vishal Shekhar announced that in the coming days their new record label V & S would be recording songs with the six participants of the contest namely Apurva, Mussarat, Amanat, Junaid, Raja, Sunil and Saberi.

Vishal -Shekhar’s record label V & S seems to have indeed proved to be a godsend gift to these aspiring contestants. It will especially be a rewarding boon for Saberi, Raja and Sunil since they get eliminated in the “Chakravyuh” round. Now atleast they have something to smile about. Their hard work and sincere efforts seem to have paid off. Hats Off to Vishal Shekhar and congratulations to all the six future stars of tomorrow.


In the second round, Raja Hasan and Saberi get eliminated. Everybody gets very emotional. The mentors come on the stage and sing 'Allah ke bande' with Raja. Ismail Darbar pleads with everyone to bring Raja back in the competition.


Another day of power packed performance. To know more, don’t forget to tune into your favorite show Zee SaReGaMaPa C2007 on June 22nd and 23rd at 10 PM IST.

14 years ago gr8 article...it sounds macho to redo stunts but for crying out loud..look b4 u leap..lol.. oh well i cant stand this mans guts so had to read now wat happened... ;)

azminam 15 years ago Thanks for keeping us upto date. Good info especially when you miss an episode.

+ 2
15 years ago yay amanat n mouni r in but aww harpeet is out shoot!!! but srgmp rocksss

+ 3
15 years ago cant wait to see it...come hell or high water ya deadlines to meet..ab to show dekhke rahenge...

+ 6
15 years ago Happy that Mauli is in but Harpreet shouldnt have been eliminated! I feel that nothing is left in this show:(

+ 3
15 years ago I really feel very sad for Harpreet. All talented signers are being eliminated. What the heck....grrhh...I am starting to hate this show.

15 years ago feel bad for Harpreet. I think he has given very good performances. I also like Richa.. I think she is better than Mouli