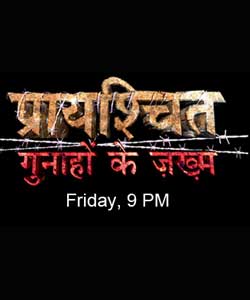 Sony TV's Prayashchit - Gunahon Ke Zakhm, a one of its kind show which depicts real life experiences of various people who have done wrong deeds in their life will feature the story of a man from Singapore who failed in his life this week.

A source says, "This week the viewers will see the story of Paul from Singapore who is a smuggler. He was associated with Haji Mastaan, the gangster from Mumbai. When he came to India for some work, he fell in love with an Indian girl and ended up marrying her. After marriage they got settled in Singapore where they had a kid. After having a daughter his wife left him and eloped with her boyfriend that she had in India. When he returned to India to call her back she confessed that she is pregnant which made him furious and slapped her. With the unbearable and intense blow his wife died."

We hear that Paul has only one blood relative, his daughter who is not to be found.

Let us hope he gets back his daughter after seeing him in the show.

Suneel_kumar 8 years ago y u gave wrong details?...u said this show will end after 6 weeks...but its still running

Naina007 8 years ago am I the only one who has a problem with this show?

koool_shikhii 8 years ago i have heard that this is a very nice show...and also that jisne bhi yeh show bnaya hai wo pakka ek bahut hi unique soch waala hoga...and this story sounds great...keep it up...!

Bigg Boss 14: Kavita Kaushik shuns reports of being a part ...
15 minutes ago