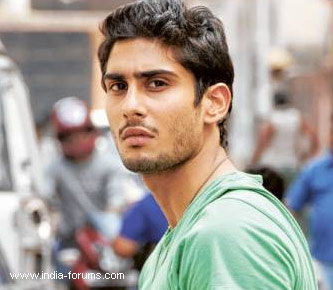 Actor Prateik took time off from his busy schedule in Varanasi to fulfil his maternal grandmother Vidyatai Patil's wish to visit sites in the temple town.

The 25-year-old is currently shooting for "Issaq" in Uttar Pradesh. Since the schedule was for more than a month, he took his grandmother along for the shoot.

He also escorted her for all the sightseeing, including a holy dip in river Ganga, said a source.

"It was amazing shooting in Benares, especially in the Ganga, as well as having grandma around. It was my first time and I didn't know that the water would be so cold. I was freezing as we were shooting for hours in the running current of the river," Prateik said in a statement.

Prateik, son of actor Raj Babbar and late actress Smita Patil, is very close to his maternal family. He took personal care of his grandmother during the work schedule.

"He is extremely close to his maternal family and has the highest regard for his grandmother. It was endearing to see him escort her around Benares to soak in the sights of the city.

"It was also the actor's first experience with the holy city and the Ganga. He shot for several scenes in the river as well for over two hours," added a source.

Produced by Shailesh Singh and Dhaval Gada, "Issaq" is an adaptation of William Shakespeare's "Romeo Juliet". It is being directed by Manish Tiwary.

The female lead for the film is yet to be decided.

Sonu Sood to Help students Stranded in Kyrgyzstan: “We are operating ...