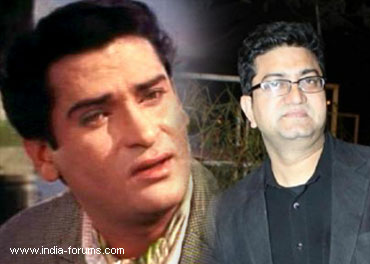 and says that the world "Uff" reminds him of late Bollywood legend Shammi Kapoor.

Sung by Sonu Niigaam and Sunidhi Chauhan, "Jab se mere dil ko uff" is a tribute to Shammi Kapoor who died last year. The star was known for his typcial dancing and singing style.

"The use of the word 'uff' is very Shammi Kapoor. You can almost see his face and his head going back with 'Uff'," Joshi told IANS.

Releasing June 22, the Shahid Kapoor-Priyanka Chopra starrer has been directed by Kunal Kohli, who has taken the couple through different time zones in this love story.

Talking about the inspiration for the song, Prasoon said that it was the situation in the movie that helped him write the lyrics.

"The song required very simple lyrics. My words were inspired by the situation," he added.

Describing "Jab se mere dil ko uff" as a fun song, he said: "It is a very easy song but it has a certain meaning. Meaning does not mean that the song has to be very serious. It's a fun song and I can imagine people singing it. Already people are humming the song."

Before Death, SP Balasubrahmanyam Has Sung For Upcoming ...
4 minutes ago

Sushant's Family Displeased With Attention Being Diverted ...
6 minutes ago

After Ten Months Jacqueline Fernandez has Finally Re-united ...
16 minutes ago

Kangana Slams Anushka for Raising her Voice Against ...
43 minutes ago

'RadhaKrishn' Fame Vaidehi Nair Roped in For 'Brahmarakshas ...
48 minutes ago