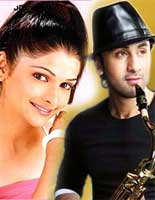 
The actress is uncomfortable doing very intimate scenes, but she's so crazy about Ranbir, that if approached, Prachi confessed she will seriously consider even kissing Ranbir onscreen.  Luckily Prachi's friend, the Queen of Tellywood, Ekta Kapoor knows Ranbir well.  After Prachi expressed her desire to meet Ranbir, Ekta promised to fix a meeting with him.  Prachi is super excited to meet her heartthrob, the one and only Ranbir Kapoor!
Currently, Prachi is working on 'Once Upon A Time in Mumbai,' where she will be seen opposite Emraan Hashmi.
Featured Video