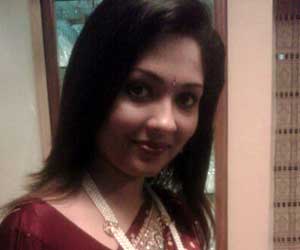 Prachi Thakkar who was last seen on Star Plus' Kasautii Zindagii Kay is making her comeback with Rajan Shahi's newly launched show on Colors, Hawan.

According to our source, "Prachi Thakkar will be playing Manjari, the second bahu of Baapji (Narendra Jha) who is very sweet, soft spoken and a positive girl. She is tortured by her husband who is a spoilt brat and harasses her a lot.  Initially the character will be very silent but later on she will fight for her rights."

We contacted Prachi who confirmed the news but refused to divulge any detail.

We hear that Aarya DharmChand Kumar who played the character of Akash in Imagine's Armanon ka Balidaan-Aarakshan will be seen playing the harsh husband opposite Prachi.

She will make her entry dramatically in the Maha episode on Saturday.

Seems like the producers are leaving no stone unturned to make this one big!

havanfan 8 years ago i loved her entry in the episode.
She is very very pretty.
Looking 4ward to see her more

AshiYuvi4life 8 years ago Yay! I love Prachi Bhabhi! Congrats to Pankit Bhaiyya and Bhabhi both! &lt;3

Ayushi_01 8 years ago Both are versatile actors and I hope their pairing creates a magic. It will be an interesting twist and to watch Baap ji's reaction upon hearing that his second son is a spoil brat, will be a treat for the viewers. ALL THE BEST TEAM HAVAN!!

anjup83 8 years ago obviously the show has to be the biggest hit.. it such a unique concept.. Havan group--We wish you all success.. keep maintaining the consitency throughout

Shaina_b 8 years ago She is a very good actress!!!!

AlexithyMia 8 years ago Gr8. Praachi is back. I Wont b watchin d show bt still, will get more pix of her. Luv u Praachi

arabian_love 8 years ago o.m.g so that it means that baap ji second son is not good

-Preeti- 8 years ago prachi is a fine actress ...wish her good luck

pinky charm 8 years ago plz give more screen space to shubhangi...we want to see her more and more...