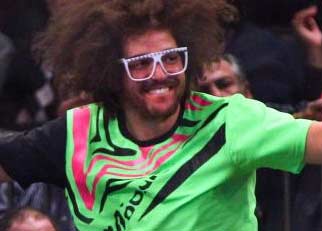 Rapper RedFoo, best known as the popular member of LMFAO, is ready to take the country by storm with his debut tour. He will be performing here and Mumbai in March, and he is excited to offer "non-stop merriment" to his Indian fans.

The singer-dancer-DJ, who separated from his band member and nephew Sky Blu, will perform in Gurgaon March 22 at the HUDA Grounds. He will also take to the stage along with the Party Rock Crew at Tulip Star, Mumbai, the following day.

Calling India a land of "gorgeous women, celebrated culture and delicious food", he has sent a "Namaste to all my desi fans" via a statement.

"I am looking forward to bringing home to you a night of non-stop merriment. We rock the party and lead by example," RedFoo said.

A cast of 12 dancers and performers led by RedFoo will entertain clubbers with the ultimate party performance.

"There are no rules in dance music. It doesn't matter if you're rich or poor. It's all about rolling out the red carpet for the good times and making the world a party planet."

The credits of the "I am in Miami b***h" dance pop star from Los Angeles include collaborations with some of the industry stalwarts - David Guetta, Pitbull, Florida and Justin Bieber to name a few.

Earlier, RedFoo and SkyBlu were slated to perform together, but now they will regale their fans separetely. SkyBlu, who is RedFoo's nephew, will also perform in the country next month, but on different dates.

Ankur Bhatia critically acclaimed for his performance in Disney+ ...