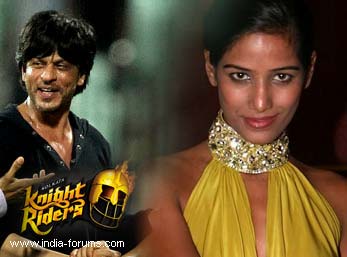 Post the KKR win, she posted her nude pic on twitter. In the picture update, Poonam lies nude on her stomach, wearing a pair of black heels, and has accessorised her bare look with black beads on her wrist and a black coloured neckpiece.

"Wowww what ever team I support always wins #IPL #KKR #SRK so as I promised, a pic is on its way," Poonam tweeted soon after KKR won against Chennai Super Kings (CSK) the IPL-5 final in Chennai Sunday night.

Poonam, who created a stir when she first offered to go nude before Team India if they won the Cricket World Cup in 2011, has been in news ever since. She often teases her fans and Twitter followers with revealing and titillating pictures, but this time, she did just what she promised.

She has also posted a "warning" for her 160,000-plus followers on the micro-blogging site.

"WARNING 18 and under should not try looking up the pic. That said, I do not take responsibility for anyone under age," she posted, adding "Korbo Lorbo Jeetbo re" - the anthem for KKR.