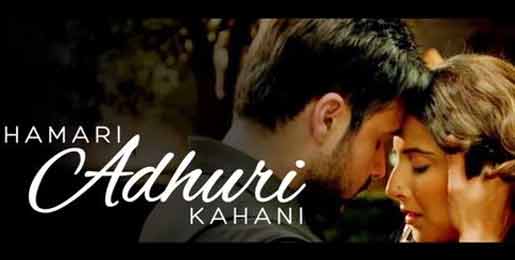 The music of forthcoming film "Hamari Adhuri Kahani" has hit the right musical notes. Actress-filmmaker Pooja Bhatt says the intensity of the song made her father filmmaker Mahesh Bhatt croon the track.

The actress took to micro-blogging site Twitter to share that she has a footage of her father singing the title track of the film, which stars Vidya Balan and Emraan Hashmi.

"You liked the various covers of the title song from #HamariAdhuriKahani wait till you see footage I have of @MaheshNBhatt singing the same!" Pooja, who is busy with her next project "Cabaret", shared.

Meanwhile, Mahesh, who has written the story of the Mohit Suri directorial, also lauded the song for expressing the right emotions with the help of lyrics.

"The shattering of a heart when being broken is the loudest quiet ever. The title track of #HamariAdhuriKahani has captured this brilliantly," the "Saaransh" director shared.

The song has been sung by Arijit Singh and composed by Mithoon, Jeet Ganguly and Ami Mishra.

Produced by Vishesh Films and presented by Fox Star Studios, "Hamari Adhuri Kahani" captures the passion of unrequited love between two souls who can't stop longing and loving each other despite their realities pulling them away from each other.

The film, which also stars Rajkumar Rao, will release on June12.